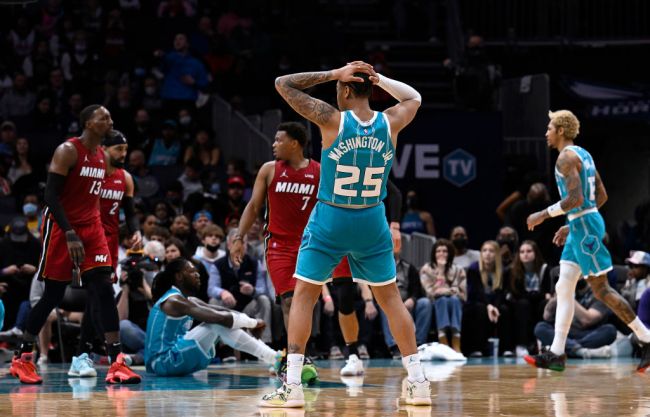 We’re taught from a young age that we can’t blame referees for losses. There are too many factors that can be controlled during a sporting event that referee mistakes shouldn’t sway the outcome.

However, there are times where you just have to wonder if referee incompetence just cost you win. That was the case last night for the Charlotte Hornets in their loss to the Miami Heat.

The Hornets ended up losing the game by 4 in double overtime, but without one blunder from the refs, the game might have never left the first OT. About midway through that OT, Kyle Lowry hit a jump shot that appeared to be a 2, but was counted as a 3. The refs never fixed it.

Since we're going to double-OT, seems like a good time to revisit this Kyle Lowry OT 3-pointer… pic.twitter.com/PRA8oHqgFI

First of all, I don’t understand how this call was missed in the first place. There’s a ref standing right behind Kyle Lowry as he takes the shot. There’s also a ref on the baseline who has a pretty good view of the shot from the front. It’s also not a particularly close call.

Then, the refs refused to review it. Lowry made his shot with 2:02 left in OT. The next stoppage didn’t occur until the hornets took a timeout with 47 seconds left in the game. The refs decided that was too long to go back and review it.

So now we know the statute of limitations on fixing blatantly wrong calls is somewhere under a minute and 17 seconds. I guess now coaches know they might have to burn a timeout to make sure these kinds of calls get fixed.

This is a call that should have never been able to stand and it likely ended up costing the Charlotte Hornets a win.