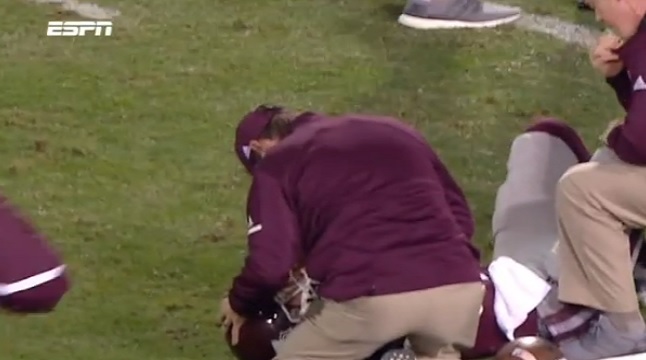 It seems like 2017 has been full of terrible injuries. Just one month ago, Boston Celtics guard suffered a nasty foot injury during NBA’s opening day game and tonight we saw another brutal injury in college football.

(We won’t post the video here but you can see it by clicking this link. Be warned the video is very graphic. _

While Fitzgerald was recovering on the ground, Miss State fans clanged the bells for him and cheered him on.

Prayers out to Nick Fitzgerald. Hate to see player go down like that

Despite having just suffered a terrible injury on the field, Fitzgerald cheered on his teammates while getting carted off the field.

That may have been the best post-injury carted off the field moments I’ve ever seen. Certainly great leadership from Nick Fitzgerald #EggBowl #SEC pic.twitter.com/XxYSox0hNj

Fitzgerald has been the best thing going for Mississippi State this season so it’s terrible to see him go down like this. The junior had thrown 1,770 yards passing and 15 touchdowns while adding 968 yards on the ground before tonight’s game. ‘

Hopefully Fitzgerald is able to bounce back in time for his senior season but considering how serious that injury looked on the field I wouldn’t be completely surprised if his career isn’t potentially over.

As of this moments there hasbeen no word on Fitzgerald’s condition but we’ll make sure to update this post once we have more news on his injury as soon as it’s made available.

Update: Fitzgerald posted a message to fans on Twitter saying that he was going to come back stronger after the injury.

I’ll be back stronger and better than ever! I love all my Hailstate fam and all I want right now is for all of y’all to ring your bells as loud as you can and support this team to a huge egg bowl win! #HaiIState