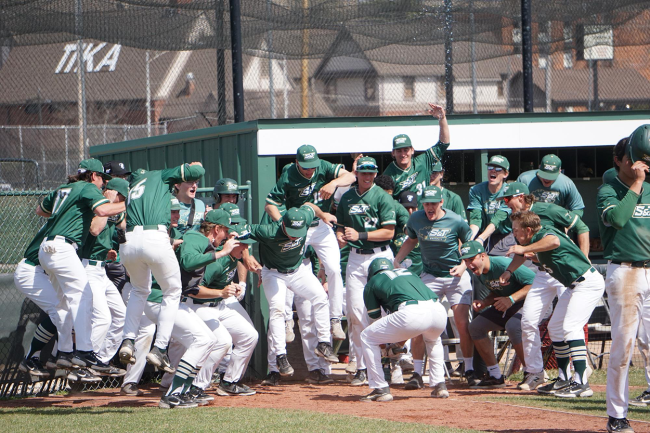 College baseball players are some of the biggest characters out there. Missouri S&T third baseman Cole Hampton is no exception.

During a four-game series at Southern Indiana on the first weekend of May, there was a bit of weather in the area. As a result of the thunderstorm, one of the games was delayed.

Weather delays are not uncommon, particularly on the collegiate level where getting in games are crucial, and they are typically pretty boring. Both teams go to their respective dugouts or clubhouses, try to stay loose, and wait out the rain.

Some teams might listen to music, others might play some Fortnite, and others might take a quick afternoon nap. Some teams, however, ban together to put on a show.

In fact, some college baseball weather delays are more exhilarating than the actual games themselves. Whether it be a joust between the two teams at home plate or some incredible theatrics that pits both sides against one another in a rain delay battle, the players can get really creative.

That was exactly what happened as Missouri S&T waited to resume its game against Southern Indiana. Hampton, a redshirt junior, stole the show.

As the weather rolled through and the waiting continued, Hampton proceeded to show off his remarkable talent — the ability to balance various objects on his nose and chin. He balanced a bat, a hat, a helmet, a closed folding chair, an open folding chair, a hand sanitizer dispenser and a massive pipe.

Both teams lost their minds as Hampton showed off. It was incredibly entertaining.

After Hampton’s talent went viral across in the internet, Cirque de Soleil got in on the fun and offered him a job if the whole baseball thing doesn’t go as planned.

College baseball players are some of the biggest characters out there and Cole Hampton is no exception. Give the man a round of applause!