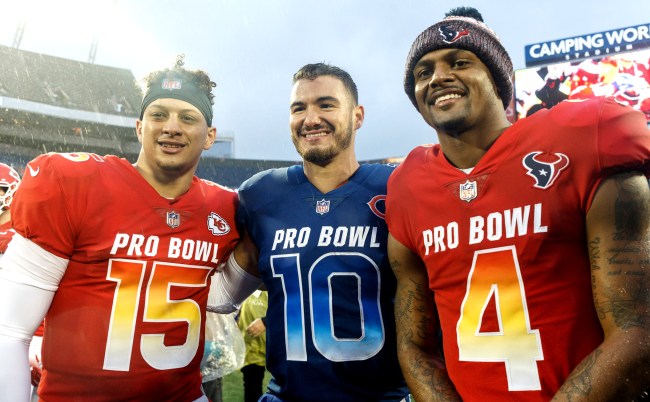 Boy, that picture of Mitchell Trubisky with Patrick Mahomes and Deshaun Watson at the Pro Bowl sure seems like a hundred years ago, doesn’t it, Chicago Bears fans? Incredibly, the photo was taken on January 27, 2019.

Back then, the selection of Trubisky with the second overall pick in the 2017 NFL Draft wasn’t looking quite so terrible.

After all, the Bears had just seen Trubisky go 11-3 as the team’s starting quarterback, completing 67% of his passes for 24 touchdowns and just 12 interceptions. The sky was the limit!

Now, however, four years into their NFL careers, Trubisky sits with 58 TD passes and 34 interceptions, while Watson has 95 passing TDs with just 35 picks, and Mahomes… well, he’s just been ridiculous, throwing for 107 touchdowns with a stingy 20 interceptions (and he only played in one game his rookie year, while Watson played in 7 and Trubisky played in 12).

All of which makes this weekend’s Bears vs. Texans game rather interesting as Trubisky has once again wrenched the starting QB job in Chicago from Nick Foles (after at one point falling behind Tyler Bray – who? – on the depth chart).

Foles gets hit as he throws, but finds Miller in stride for the TD.

The results speak for themselves. pic.twitter.com/tewhFbRfMt

As he gets ready for Sunday’s noon kickoff versus Houston at Soldier Field, the Chicago Sun-Times’ Mark Potash talked to Trubisky about the ongoign comparisons.

“I don’t control that narrative. I don’t control what people say about it,” said Trubisky. “It’s always going to be a story just because that’s the draft class we were in. It was me, Deshaun and Pat [Mahomes]. We were picked where we were, and now it’s up to us to make the most out of our opportunities. They’ve done a great job with theirs, and I’m still trying to write my story here, so that’s all there is to it.

“My opportunity is to lead my team this week and try to get a win. I’m excited about that. I’m also happy for their success as well because obviously they’ve earned it.”

“I’m excited about the game, playing against Deshaun and the Texans, so it’s going to be a good challenge, especially for the spot that we’re in this week,” he added.

He might be one of the few players in the NFL who is glad there won’t be any fans in the stands on Sunday. Especially if he struggles.