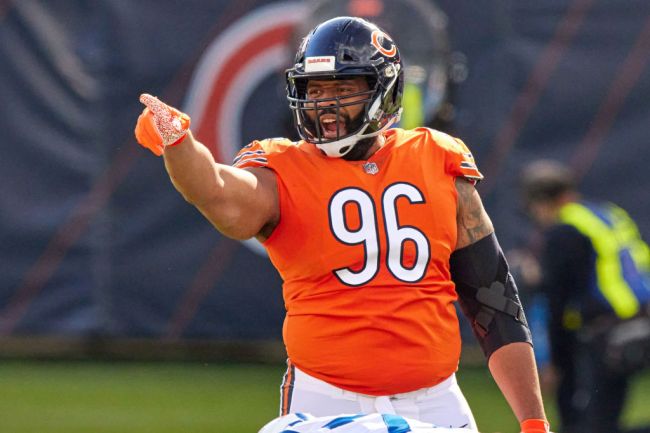 It’s been a pretty solid couple days of sports, so we knew a dud was in the works. And that’s exactly what the late October Monday Night Football game between the Rams and Bears was: A boring blow out, with Nick Foles losing his luster and the Rams dominating the ball.

The highlight, easily, was the story of told in the fourth quarter about Akiem Hicks, veteran Chicago Bears defensive end.

Akiem Hicks went to the University of Regina in Saskatchewan, Canada. Apparently like all of us, he loved 50 cent wing night.

In fact, during one wing night, bragged “a record” 40 beers with his buddies during wing.

Be prepared to go to the hospital for alcohol poisoning if you party with Akiem Hicks 🤣 pic.twitter.com/vob6Y4BEAt

did I just hear a story on my tv about Akiem Hicks drinking 40 beers during a wing night?

The highlight of this national broadcast of the Bears was a story of Akiem Hicks drinking 40 beers in one day.

“Poutine, perogies and forty beers on wing night at the old Al” MNF story just now on Akiem Hicks from his days at the U of R!

Akiem Hicks drinking 40 beers at .50 cent wing night in college is the story I didn't know I needed tonight: pic.twitter.com/NgByWh93tp

Turns out Akiem Hicks really enjoyed his time in Canada. As you might recall, Hicks didn’t qualify academically to get a big-school NCAA scholarship when he came out of high school – he signed to play at LSU, but NCAA violations made him ineligible for his debut 2009 season in the SEC.

So he headed to Canada – a classic workaround.

Here’s the rest of the Akiem Hicks 40 beers story, via the Ottawa Sun:

“I’ve never drank that many beers in my life,” said Hicks. “But those Canadians got me going, man. The drinking age was 19, so we had guys … oh, maybe this shouldn’t be in the article (more laughter). We had a good time, man. We had a really good time.”

But eight beers shy of two, two-fours? I know a lot of football fans back home reading this and saying “right on, mann, Hicks can hold his suds!”

“I was one of the last ones standing,” he said. “Let’s just say … oh, I’m going to put his name out there, let’s just say Stefan Charles wasn’t so lucky.”

Charles, an Oshawa native, was on the same Regina Rams D-Line as Hicks. He went on play three years with the Buffalo Bills and one with the Detroit Lions.

What happened to Charles that night?

“I’ll never forget those days, man. It was cool. I really enjoyed my time in Canada.”

Also, how much fun is it to say the name of his college?