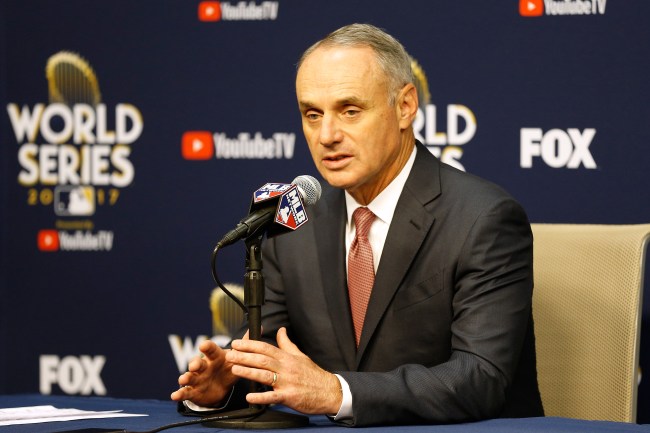 The Houston Astros have become the most hated team in baseball and Rob Manfred wants to make sure that teams around the league don’t take justice into their own hands regarding the Astros cheating scandal.

On Friday, Astros manager Dusty Baker urged the MLB to help protect his players from potential retaliation and to discipline opposing teams who hit Astros players with pitches because they’re angry at the organization for stealing a World Series.

“I’m depending on the league to try to put a stop to this seemingly premeditated retaliation that I’m hearing about,” Baker said Saturday morning. “And in most instances in life, you get kind of reprimanded when you have premeditated anything. I’m just hoping that the league puts a stop to this before somebody gets hurt.”

During an ESPN interview with Karl Ravich the MLB commissioner says he’s going to issue a memo to all teams about increased ramifications for teams/pitchers who decide to deliberately hit Astros players this season.

MLB commissioner Rob Manfred told @karlravechespn the league plans to lessen in-game use of video by players and will mete out more severe discipline for pitchers who intentionally throw at hitters. Much more on the fallout from the sign-stealing scandal: https://t.co/Z7fP5jsnMP

“We have been working on for some time a memorandum about being hit by pitches, intentionally throwing at batters,” Manfred told ESPN’s Karl Ravech. “It’s really dangerous, really a dangerous undertaking, and completely independent of the Astros investigation we will be issuing at the beginning of this week a memorandum on hit by pitches which will increase the ramifications of that type of behavior.”

Over the next three days I’m going to meet with all of the managers of major league baseball and the topic will be addressed. It is simply not appropriate to express whatever frustration you may have growing out of the Astros situation by putting someone physically at risk by throwing at them,” Manfred said. “It’s just not acceptable.”

It’s doubtful that Manfred and the MLB are going to be able to stop pitchers from plunking Astros players this season no matter what they say.