MLB Is Moving Second Base, Fixing A Mistake That’s Been Around For 135 Years 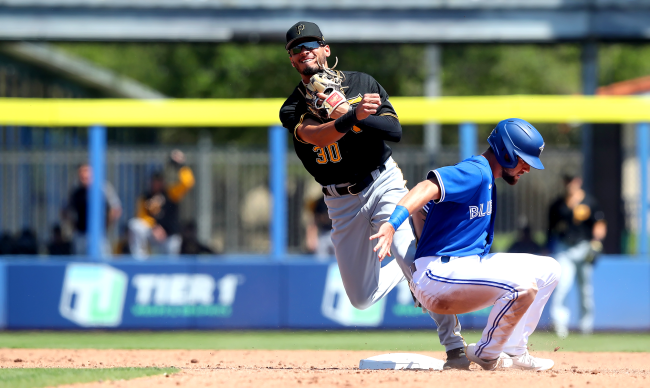 Major League Baseball has been tinkering with its rules over the past few years like never before. Part of it had to do with the pandemic, but a large portion of it is the league trying to make the game better.

MLB’s efforts in using these new rules to improve the game have been pretty hit or miss though.

The benefits of things like adding a universal designated hitter and making the bases bigger have yet to be determined. (Unlike the runner on second rule for extra innings, which is almost universally hated.)

Another change that is on its way, which also has to do with the bases on the field, involves Major League Baseball correcting a mistake that was made 135 years ago in 1887.

They’re moving it in towards home plate, making it about 13.5 inches closer to first base and third base, reports The Athletic.

Why is Major League Baseball moving second base this year?

It turns out that everyone’s assumption that there has been 90 feet between all the bases all these years was wrong.

See where first base and third base are located? They’re nestled into their natural corners on each side of the diamond. But now check out second base. It looks lovely, positioned aesthetically in the middle of the infield. Just one problem.

It’s not nestled into its own natural corner of the diamond.

can't sleep right knowing second base is like this, won't feel better until its fixed https://t.co/89YTLmh5OL pic.twitter.com/Z0m2x8nZO9

Instead, it’s too deep (geometrically speaking), positioned so that the imaginary corner runs right through the middle of the bag.

The short explanation is that first base and third base were repositioned to help umpires make fair/foul calls. How? Because once they were moved to their current locales, any ball that hit the bag was obviously fair.

So… why, after 135 years, is Major League Baseball suddenly concerned about the location of second base?

Because for 135 years the actual distance between first base and second base has been 88 feet, 1.5 inches. Now, with the larger bases and the repositioning of second base that distance will be shortened down to 87 feet. The hope is that this will lead to more action on the bases.

The most surprising part of all of this, however, is the fact that, as Jayson Stark reports for The Athletic, Major League Baseball has already tried all of this… last year!

During the second half of last season in Triple-A West (the old Pacific Coast League), second base was moved in and they used 18 inch bases instead of the normal 15 inch wide bases.

This year every level of the minor leagues will be doing this in the second half of the season, and probably in the major leagues come 2023.

How big of a difference it makes in the game, just like the universal DH, remains to be seen.