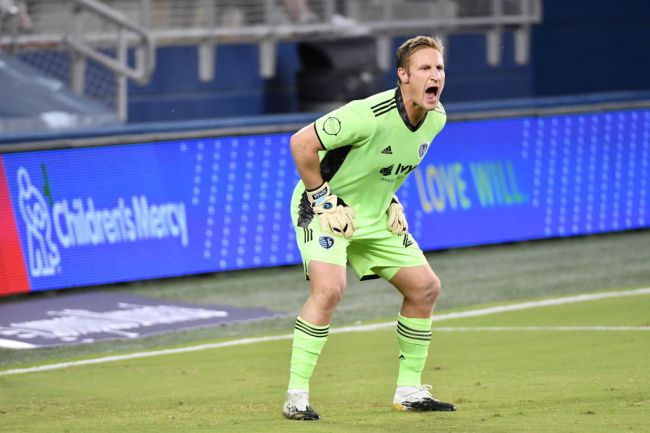 During the second half of Saturday’s Major League Soccer match between Seattle and Kansas City, things got a little bit violent. In the 54th minute of a one-goal game, Sporting KC goalie Tim Melia forgot what sport he was playing.

The 35-year-old thought he was in the WWE!

After the Sounders played a ball into the box, Melia was tied up with striker Cristian Roldan on the goal line. Melia punched the initial effort away, but decided to take an interesting approach to stopping Roldan from getting a second opportunity.

He straight up tackled him to the ground, side slam style. Somehow, he was not removed from the match and got away with just a yellow card.

It was VICIOUS, take a look:

This was a yellow card. pic.twitter.com/XzhBk2pGor

The Rock got ahold of the tackle and knew exactly what Melia was doing. Even he, the man who revolutionized the move, agreed that it should have been a red card.

💯 this is called delivering a devastating, “Rock Bottom” 👏🏾👏🏾
+ I assume player in green got up and fought his ass off, unless he got his bell rung.
+ I also assume there was a card delivered in the red color palette 🤣 https://t.co/anvlN9Sx5T

Melia’s side slam is a move that is rather familiar to the wrestling legend. It has become synonymous with Dwayne Johnson.

In response to The Rock’s belief that the foul should have called for Melia’s removal from the game (because it should have), the Sounders were in agreement. They smelled what he was cooking.

we smell what The Rock is cookin’ pic.twitter.com/Fuj6UVmPdk

Here was the explanation that Seattle received about why the takedown was not given a red card:

How was it determined that a yellow card was the appropriate punishment when the observable conduct appeared to qualify as violent conduct?

"The observable conduct by Tim Melia did not rise to violent conduct due to the lack of brutality" https://t.co/zlwXizEDF7

Seems like a Rock Bottom should be a red card, no?