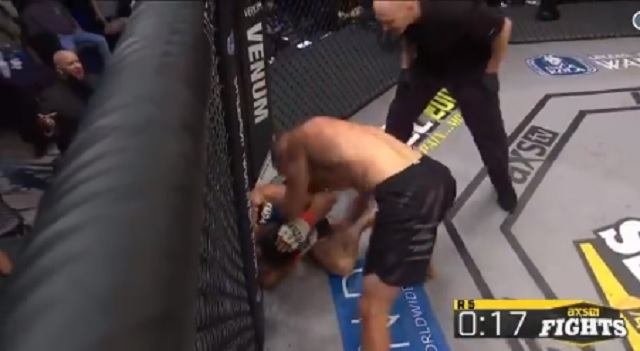 During this weekend’s LFA 56 at Mystic Lake Hotel and Casino in Prior Lake, Minnesota lightweight Austin Hubbard put on a dominant performance against Killys Mota to win the LFA lightweight championship.

Unfortunately Hubbard’s win was marred in controversy after the referee failed to stop the fight as Hubbard put a beating on a tired and defeated Mota.

Good grief! What a mess at the end of a stellar performance by Austin Hubbard, who overcame the odds for the title at #LFA56!@lfafighting pic.twitter.com/fH4AIo0Yfx

MMA fans were disgusted by the ref’s actions and called for him to be banned from officiating another fight.

Oofda. Ref should never be allowed to officiate an MMA fight again.

Dude must have went to the Mario "the body is still warm" Yamasaki school of refereeing. pic.twitter.com/4awfHktDFw

MMA looked bad this show. Two fights this ref made bad calls. Taking away the wrestlers advantage one fight, then two bad calls in the last fight. The first ending the round early, then not stopping it. He should not ref again.

Seriously? What is this ref looking for to end this fight? Terrible

Not only is the ref catching heat but so is Mota’s corner for not throwing in the towel.

Ok it's easy to be angry at the referee, but in addition to this failed referee, at what point do you as a corner throw in the towel? Do you stand there, towel in hand, shouting at the ref the entire time?

People mad at the ref but did this guy not have anyone in his corner?

throw the towel in! does his corner want him killed