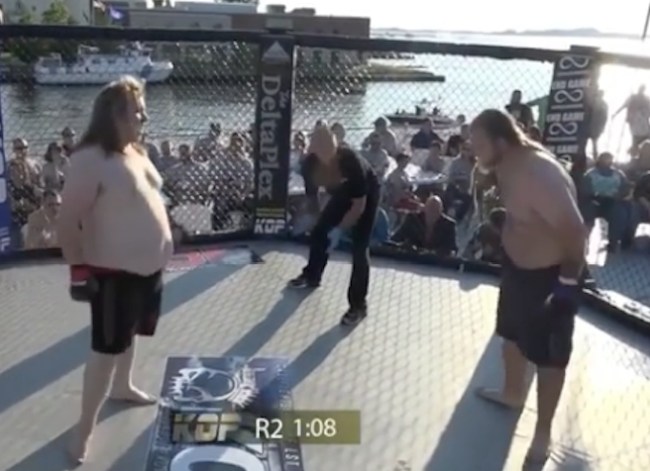 When you’re in the depths of battle and exerting all your energy toward eliminating the man in front of you, holding in your bodily functions isn’t high on your list of urgent chores. Just ask the UFC fighter who shit herself while trying to escape a choke hold last month. The task of keeping everything in becomes a lot more treacherous when you’re blatantly out of shape and not conditioned to deal with high levels of stress on the body.

And that seemed to be the case last weekend in Michigan. During KnockOut Promotions super heavyweight bout between 270 pound amateur fighters Jesse Reasoner and Sean Needham, Reasoner looked to have secured a W after a flurry of wild punches landed on his gassed opponent.

But, Needham was rescued by the power of the puke, after Reasoner barfed all over the octagon mat, ending the match by default and handing Needham his first ever MMA victory. Check out the scene below:

Needham will defend his undefeated record as he is set to take on Conor McGregor in September. Just kidding, but that would be fucking awesome.