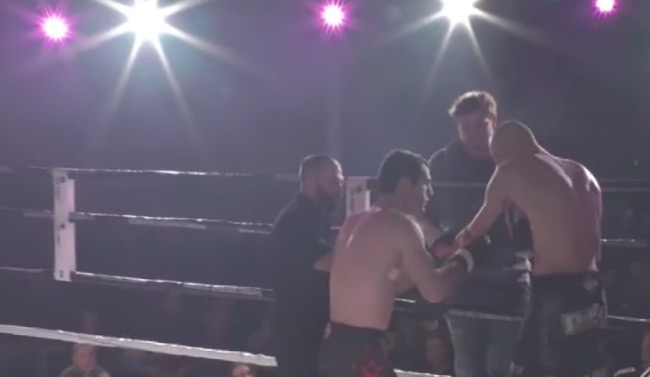 During an MMA fight months ago in Germany between Arkadiusz Wroblewski and Paata Tschapelia, Poland’s Wroblewski dislocated his shoulder while throwing an attempted haymaker and missing with the overhand right. Instead of ending the fight on the spot, the referee allows Georgia’s Paata Tschapelia to casually help his opponent pop the shoulder back into place before Paata knocked Arkadiusz the fuck out.

This would’ve been the greatest moment in MMA history of Wroblewski went on to win the match. Unfortunately for him, he got KTFO’d just 3 minutes and 52 seconds into the first round. The ref probably should’ve just called the fight after his shoulder popped out of its socket, but then we wouldn’t have been treated to one of the greatest moments in MMA history.

I just have to say that I’m absolutely amazed that the fighter was able to continue after popping his shoulder out of its socket. I’ve only done that once, and my right shoulder only popped out a little bit, but it was more painful than when I tore my meniscus (twice). That shit HURT a LOT. I cannot fathom having to do something physically strenuous immediately afterward, so I’ve got nothing but respect for this fighter’s dedication even though he got KTFO’s within moments. (h/t Shock Mansion)