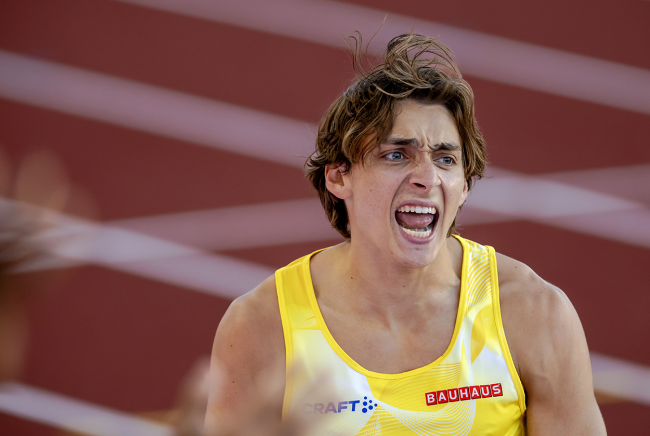 Mondo Duplantis is the greatest pole vaulter of all-time and he is only 22 years old. On Sunday night, as the reigning Olympic champion, the Louisiana-born Swede won the World Championship and broke his own world record in the process.

But that wasn’t even most the electric part of his historic evening.

Duplantis, who was born in Lafayette, grew up in a split, insanely athletic household. His father is of Cajun descent and is a former pole vaulter himself, and his mother hails from Sweden and is a former heptathlete and volleyball player.

As a result, he and his two siblings were raised in/around sports.

Mondo’s sister Andreas represented Sweden as a pole vaulter growing up and his brother Antoine is LSU baseball’s career hits leader. Needless to say, the Duplantis family is talented.

Despite all of his family’s accomplishments, Mondo is the most successful and he closed out the World Championships in style.

As the last event on the final day at the World Championships in Eugene, Oregon, Mondo had the entire crowd behind him. He had already secured the world title by jumping over 6 meters after his rivals failed to make it over 5.94m and wanted to keep going.

To do so, Mondo set the bar at 6.21 meters, which would represent the world record. After bailing out of his first attempt, he lined back up, came down the track and launched himself up over the bar.

It was exhilarating and it looked like he could have gone even higher. As soon as Mondo got to his feet, he ran over to celebrate with the crowd and hit the most casual running front-flip out of nowhere. It was electric and sent the place into a frenzy.

Mondo Duplantis breaking his own world record in the pole vault is cool, but the celebratory front flip is ELITE 🇸🇪🥇
pic.twitter.com/j13KkbYDsJ

Sunday marked the fifth time that Mondo had broken the world record. Nobody can get close to his vaults and he is competing against himself at this point. And he is only 22 years old, so his reign as the king of pole vault is far from over. He just keeps going higher.