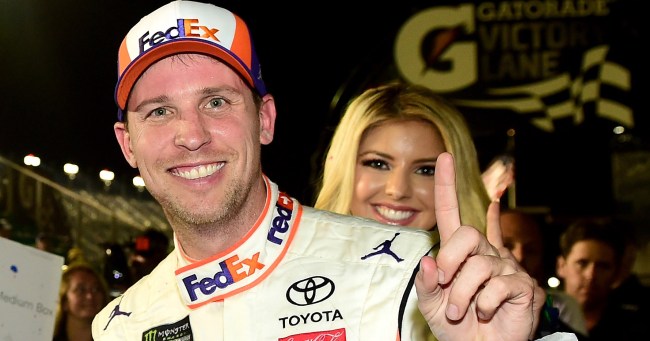 Sooo… did any of you watch the Dayton 500 on Sunday? I did. It was a pretty good race, and then a complete crashfest in the last 10 laps or so, so all-in-all it was a rather entertaining viewing experience.

Well, it was, until the race winner Denny Hamlin was being interviewed in Victory Lane.

Because during his entire interview there was a Monster Energy Girl staring a hole through the camera lens standing behind him.

I am not making this up when I say that I literally had to change the channel because I could not watch anymore of that interview with her standing back there like a smiling robot looking at me. I couldn’t follow anything Hamlin or the broadcasters were saying because all I could do was look at her to see if she was still there going full Fiji Water Girl.

The @MonsterEnergy girl is not missing her opportunity for five minutes of fame #Daytona500 #DennyHamlin pic.twitter.com/r63MiYJ53l

Seriously, she was like that for the entire interview, which wasn’t short, mind you.

Monster girl is really stressing me out in the background there. I feel like she’s trying to look into my soul #DAYTONA500

Tuned in for the end of the Daytona 500 and Denny Hamlin is being interviewed from Victory Lane and the camera is focused not on him, but on the Monster model standing about 5 feet behind him.

By the way, she wasn’t the only one of the Monster Energy Girls looking for her 15 minutes. Another one standing in the background up on the podium was also very aware of where the camera was, but she was just too far away to make it work. (She’s the brunette in the photo below. She too was creeping me right TF out.)

Of course, I was curious who this woman was creeping on Denny Hamlin, but it turns out I didn’t have to do any real research because my man Joe over at Busted Coverage already did the legwork and figure it out. It’s what he does.

Turns out that the Monster Energy Girl in question is named Brooke Ashlynn Miller, was Miss Malibu USA 2016 and went to Pepperdine! (No idea why I put an excalamtion mark there. Just seemed appropriate.)

On the plus side, there were some seriously A+ tweets that immediately hit the web during her epic stare-off with the camera.

Nothing more disturbing than the @MonsterEnergy girl's floating head, and creepy smile, over @dennyhamlin's shoulder in victory lane. #DAYTONA500

Who else thinks the Monster Energy girl behind Denny Hamlin in this interview is creepy? #Nascar #Daytona500 #CreepyMonsterEnergyGirl

Watching the #Daytona500 and the #MonsterEnergy girl has been standing behind winner @dennyhamlin like a smiling idiot for like 5 min now. A cardboard cut out could do the same thing. #smilingidiot #Creepy pic.twitter.com/QQqCAZVuqS

hey, MonsterEnergy Girl try to look at something else besides the camera #NASCAR #Daytona500 pic.twitter.com/CUE9Ve1cTv

It’s like the Monster Energy girl has been threatened she’ll lose her job if she doesn’t smile and stare directly into the camera for the entire interview. pic.twitter.com/cJv3AOscK1

Y’all see that @MonsterEnergy girl keep creepin to get in the camera behind @dennyhamlin 🤣 Girl MOVE, it ain’t your win nor spotlight!🤦🏼‍♀️ @DISupdates @NASCAR #daytona500

Cracking up right now with the @NASCAR Victory Lane interview of @dennyhamlin – grinning and unblinking @MonsterEnergy girl is in focus and Denny isn’t. Hah!

The @MonsterEnergy girls always look so creepy in the background pic.twitter.com/47rsN7ba5S

I want you to love me like Monster Energy girl loves the camera.