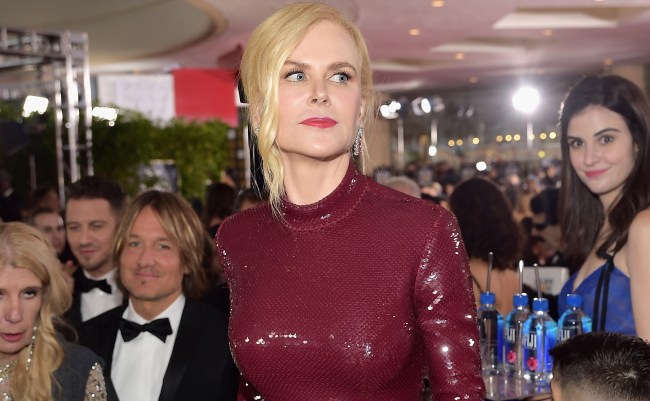 Man, who would have thought that something as simple as going viral for photobombing celebrities at the Golden Globes would turn into such a legal nightmare?

First, we had Fiji Water Girl Kelleth Cuthbert (real name Kelly Steinbach) taking advantage of her 15 minutes of fame to land an acting role on the soap opera The Bold and The Beautiful.

She also landed a couple of endorsement deals and everything seemed to be coming up Kelly, until… she sued the company, Fiji Water, that hired her for the role that made her semi-sort of famous.

Cuthbert/Steinbach sued Fiji Water for creating “an unauthorized marketing campaign based off the viral sensation she created at the Golden Globes” by creating and distributing cardboard cutouts of her to stores for a marketing campaign.

She sued Fiji for her cut of the $12 million-plus she believes she earned the company by going viral.

Fiji Water, naturally, disagreed, stating, “This lawsuit is frivolous and entirely without merit.”

You know what Fiji Water doesn’t think is “frivolous and entirely without merit?” Their own lawsuit, which they have filed against Cuthbert/Steinbach for breach of contract. In court papers, they claims that Cuthbert/Steinbach has turned against “the very company that is entirely responsible for providing her the opportunity and the means to capitalize on her fleeting 15 minutes of internet fame.”

Fiji alleges in its counterclaim that Steinbach and her team agreed to a one-year deal that would give her $90,000 as a brand ambassador, and that Fiji could use her “name, likeness and performance” during the term. The brand claims that she confirmed she was a brand ambassador in a local TV interview and was then videotaped signing the agreement last month at the brand’s offices — where she was allegedly shown the cardboard cutouts and told about the plan to place them in stores.

But Steinbach then “took the only signed copy of the Consulting Agreement with her.”

Steinbach’s lawyers say that she destroyed the document, and it was not an agreement anyway.

Ready for a smoking gun?

As part of its countersuit, Fiji included an image that Steinbach allegedly posted on Instagram of herself posing with the cutout, captioned, “Met my doppelgänger today.”

Fiji also claims Steinbach agreed not to promote competing brands and that she breached her deal by appearing in other campaigns and on The Bold and the Beautiful.

UPDATE: Statement from Cuthbert’s attorney.
Kelleth’s lawyer, Kecia Reynolds, at Pillsbury commented that the complaint filed by Fiji Water today is an obvious publicity stunt to counter revelations of Fiji Water’s unlawful actions. However, Kelleth will not be bullied by Fiji Water, the Wonderful Company, or its billionaire owners. To be clear, Fiji Water has not “feed” Kelleth. Fiji Water has never paid Kelleth and there was not an agreement, not an email agreement or fake document agreement. Fiji Water created cardboard cutouts of Kelleth to advertise and market their product. Fiji Water profited from using Kelleth’s image without consent and she is legally entitled to damages and profits from the use of her image. Fiji Water’s complaint is meritless and Kelleth is confident she will prevail in court.