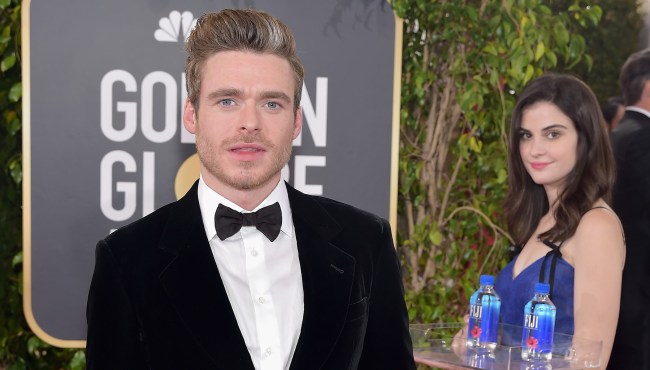 You know how you can tell if you did your job really well? When people who didn’t even see you do your job find out and talk about it.

Such was the case with Kelleth Cuthbert, the model who went viral as the “Fiji Water Girl” for photobombing celebs at the 2019 Golden Globes.

I didn’t watch one second of the Golden Globes or its red carpet coverage and the next day even I knew all about the “Fiji Water Girl.”

Yep, it’s performances like this that turn you into a star… apparently.

I say this because Cuthbert, a model from Toronto, has managed to turn her unrivaled ability to hold a tray of water bottles into an actual acting gig on a real television show, according to Deadline.

Kelleth Cuthbert, the Fiji Water Girl whose blue dress, coy smile and knack for being in strategic places captivated the online world on the 2019 Golden Globes red carpet, has been working on the soap opera The Bold and The Beautiful. Her appearance will air Feb. 6, according to reports.

Cuthbert posted a photo of herself on Instagram with some of the soap’s cast this week, captioning the shot, “Thank you to the lovely folks of @boldandbeautifulcbs for having me yesterday!”

So was her photobombing a calculated move to score acting or modeling gigs? No, she told Glamour.

She tells us she simply moved from spot to spot and passed out water as she tried to keep a neutral but pleasant face. “Everyone has their work or event persona,” she explains. “You try to look at least somewhat pleasant and not have too much resting bitch face. You have to look somewhat friendly and happy to be engaging with people.” She wasn’t trying to photobomb everyone, she says: “Sometimes you’re caught between a lot of cameras, so there’s a lot of photographers at different angles. You’re just kind of trapped sometimes. See that’s the thing: I feel like I was looking away, but sometimes I was looking so I could move out of the way.”

“…not have too much resting bitch face.”

That’s pretty much the key to just about everything, isn’t it?