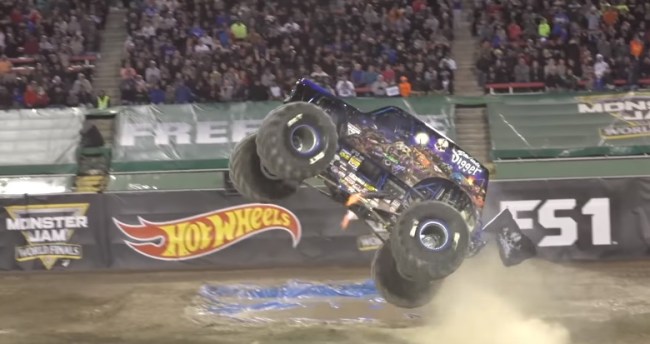 Over the weekend, Brobible made it’s way to Vegas where Monster Jam held their annual World Finals event at Sam Boyd Stadium.

Before Friday night I hadn’t attended a Monster Truck event in person in about 10 years but I’ll be glad to inform you that monster trucks doing flips and insane tricks in the air is still as rad as I remember it when I was a kid.

The event was held on the March 23rd and 24th and below are some quick highlights of what went down during the weekend. (Make sure to follow the Brobible Instagram account for our entire coverage of the event)

All weekend long I spoke with several people behind the scenes who talked about the insane amount of time and money involved to get the trucks ready and prepped for the event to only to see these massive trucks get wrecked in a matter of minutes and oftentimes seconds.

The best wreck we witnessed over the weekend involved a monster truck crashing into a wall, losing its balance and flying a good distance in the air

Dude got absolutely REKT and flew in the air. Amazing #monstertrucks #monsterjam (via @Clintus) pic.twitter.com/pSnjBBVkpr

Watching trucks do back flips will never not be fucking cool.

We would like to inform you that Grave Digger is still the GOAT monster truck
(via @Clintus)#Monsterjam #monsterjamfinals pic.twitter.com/Z2kONpeADV

Monster truck 360 and SunOva Digger coming up in the clutch.

By the end of the night it seemed like Mutant’s Todd LeDuc was a lock to win the Monster Jam Finals freestyle championship after pulling out this monster truck 360 which was apparently the first time it had ever been done in competition.

The first ever monster truck 360 (via @Clintus ) #Mutant #MonsterJam pic.twitter.com/FRIaJLNdKk

Unfortunately for Leduc, the final contestant was Sonuva Digger’s’ Ryan Anderson, who is the son of legendary monster truck driver Dennis Anderson of Grave Digger fame, and he pulled out a Kobe-esque clutch performance to win the Monster Jam championship.

Easily the coolest thing we saw at the Monster Jam Finals is the inclusion of female drivers who not only compete with their male counterparts but are also respected by everyone behind the scenes. It’s obvious that Monster Jam has made a concerted effort to recruit and encourage women to compete in their organization and the end result are women like Rosalee Ramer who pulled off death defying stunts that got the same cheers and praise as any of the men competing on the same night.

While at Monster Jam I had several conversations about whether or not “monster trucking” was a real sport or not but at the end of the day I don’t think it matters considering it seemed like most people who attended were thoroughly entertained during the two day event.

There were plenty of other cool moments (like this “Rampage” themed encore,) that you can go check out over at the Monster Jam Youtube page.

Hat tip to our friends over at Clintus.tv for providing some of the videos.