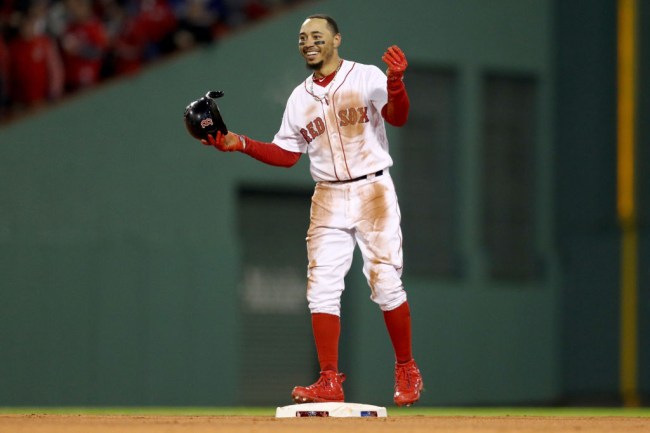 The Red Sox took a 2-0 lead in the World Series after topping the Dodgers 4-2 on Wednesday, and based on my time in Boston, players usually celebrate such victories by heading to Royale and drinking as much as possible until the city’s criminally early last call bring the celebration to an end.

Mookie Betts was kind enough to steal a base during the first game of the series and won America free tacos in the process— a steal he said was motivated by the promotion.

Mookie Betts said the reason he stole second was because he wanted free tacos. A true hero. pic.twitter.com/zk3eYKaR0i

Everyone knows it’s important to load up on food before drinking an irresponsible number of vodka sodas and the Red Sox were lucky enough to have some trays of grub waiting for them once they headed into the locker room.

However, it appears the catering staff underestimated how hungry the players were after the game and there was plenty of food left over, and while they could have just tossed it in the trash, Betts had a better idea.

According to Sox legend Lou Merloni, Betts made the trek from Fenway down Boylston Street to bring a group of homeless people a massive spread at one in the morning.

Little birdie told me an amazing story. This was the scene last night around 1am out in front of the Boston Library. Trays and trays of food fed the homeless. The man that delivered the food wasn’t looking for attention or praise BUT deserves it. God Bless you Mookie Betts pic.twitter.com/4Ox7O0edo4

What a guy indeed.