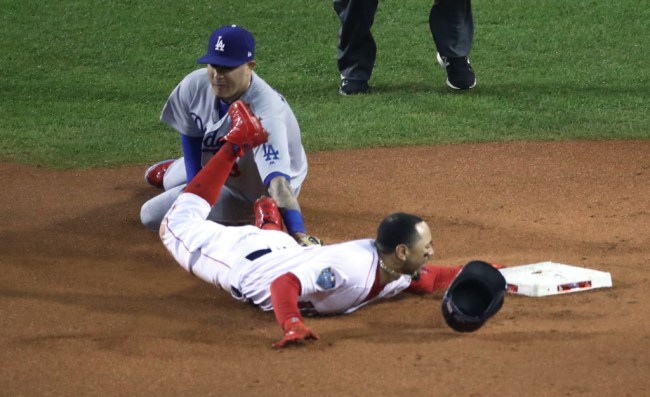 The Red Sox took home the victory in the first game of the World Series last night with an 8-4 win over the Dodgers at Fenway Park as they kicked off their effort to bring the trophy back to Boston for the first time since 2013.

Things were close heading into the bottom of the seventh inning but Eduardo Nunez broke things open by hitting a three-run home run over the Green Monster to secure the win.

I’m sure most people would argue that was the biggest play of the game but I would beg to differ.

In the bottom of the first, Mookie Betts managed to steal second base and would eventually score the first run of the game, which doesn’t seem like that big of a deal until you realize what was at stake.

Why was that play such a gamechanger?

Well, ahead of the start of the World Series, Taco Bell announced they’d once again be rolling out their “Steal A Base, Steal A Taco” promotion once again, which meant Betts managed to hook up everyone in America with some free food.

There it is! Thanks to that stolen base, everyone across 🇺🇸 gets FREE Doritos® Locos Tacos at @TacoBell next week! pic.twitter.com/O3aDjpxrzs

Thank you, Mookie. You are the hero we truly deserve.

If you somehow couldn’t tell from the tweet just above this sentence, you’ll be able to walk into any Taco Bell— a.k.a. America’s favorite Mexican restaurant— to grab yourself a free Doritos Los Taco on November 1st between 2 and 6 PM.

This isn’t the first time Taco Bell has blessed America with free food this year thanks to a fairly easily achievable athletic feat.

During the NBA Finals, the chain hooked us up after the Golden State Warriors managed to take home a road win against the Cavaliers.

You don’t have to buy anything else to get your free taco next Thursday but good luck resisting the temptation to bring the Beefy Crunch Burrito back into your life.