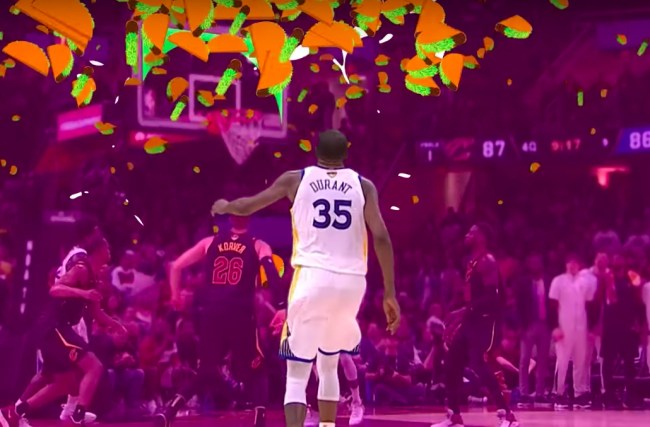 As an NBA fan, I wasn’t exactly thrilled about having to watch the Golden State Warriors play Lebron James and the wacky cast of characters he carries on his back in a series that ultimately ended exactly how most people thought it would after J.R. Smith made the most J.R. Smith play he ever has. Thankfully, there were some gracious benefactors out there who managed to get people who weren’t particularly invested in the Finals to care about them anyway.

HQ Trivia got a bunch of people to start playing HQ Trivia again when it offered a series of ever-growing jackpots that ultimately topped out at $400,000, the most money that has ever been given away by the game. However, if that was too much effort, you also managed to win a prize by doing literally nothing thanks to Taco Bell.

Before the start of The NBA Finals, Taco Bell announced they’d be giving away a free Doritos Locos Taco if either team managed to snag a victory on the road. The Warriors managed to take two games at Quicken Loans Arena, and while you won’t get to double up on your order, you can still stop by Taco Bell between 2 and 6 PM to grab some free food (if you feel guilty about not buying anything, the taco pairs very well with Baja Blast).

I should warn you that based on the lines that formed at Little Caesars around the country for free pizza a couple of months ago, you might want to do a cost-benefit analysis before heading out the door.