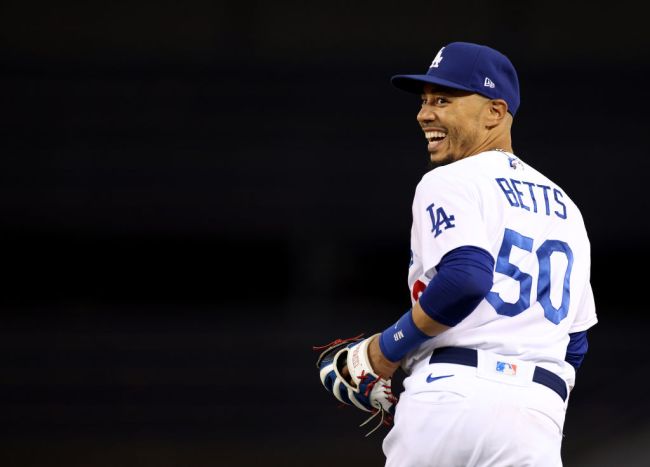 Mookie Betts is ridiculously good at baseball and certainly falls in the category of ‘freak athlete.’ He also seems like just an overall good dude, and that was on full display during the Dodgers’ game against the Reds on Sunday.

Reds rookie TJ Friedl picked up his first career hit in the sixth inning of the contest, and it just so happened to be a home run. Usually, when a rookie earns his first career hit, the opposing team will throw the ball into the team’s dugout so the player can hold onto the ball. Seeing as how Fried’s first hit was a home run it made it a bit more difficult to get that ball back.

Betts, being the thoughtful person he is, approached the Reds fan and told them that they should throw the ball down so Friedl can have it. Thankfully, this Cincinnati fan happened to be a good dude too, and threw the ball down to Betts who then threw it to the Reds’ dugout.

An inning later, Betts ran to the outfield with an autographed bat in his hand and gave it to the fan.

After the game, Friedl said Betts’ generosity gave him chills.

“That’s just first-class. It’s incredible, just for him to do something like that is definitely just world-class for him,” Friedl said. “I want to go over there and just say thank you in person … because it means so much. Just to get that ball back and for it to be my first home run. And just for him to know that and turn around to the fan, and I believe he traded a bat for it … it’s just incredible.”

“Chills, honestly for him to do that,” Friedl added.

The Dodgers won the game on Sunday, 8-5, but it’s safe to say Friedl enjoyed the game nonetheless.