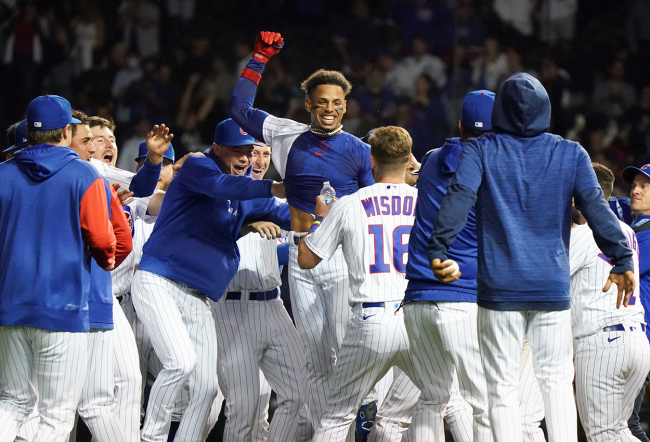 Christopher Morel made his Major League Baseball debut with the Chicago Cubs on May 17th. The 22-year-old rookie recorded his first walk-off RBI on Wednesday.

Morel, a utilityman from the Dominican Republic, is batting .268 with two home runs and six runs batted in. His most recent was his most important and it came after he shared a really cool moment with a veteran.

On Wednesday night, the Cubs hosted the rival Brewers and the game went tied at three into the bottom of the 10th inning. At that point, with one out and a runner on third, Morel stepped up to the dish and fell behind in the count 1-2.

There was a lot of pressure on the rookie’s shoulders.

To remind Morel that he was bigger than the moment, seven-year veteran catcher Willson Contreras offered him one simple piece of advice— breathe.

From the dugout, Contreras called for Morel, who looked back at the 30-year-old. The former took a deep breath and the latter followed by doing the same. It was really a really special moment between someone who had been there before and his younger, less-experienced teammate.

To make the moment even greater, it paid off. Morel dug back into the box and popped a fly ball deep enough to left-centerfield for the runner to tag on third and score.

Chicago won the ballgame on a walk-off sacrifice fly and Morel was mobbed between first and second base.

Morel’s first walk-off win came with a pretty remarkable look at the relationship between a rookie and a veteran. And, of course, he was drenched in celebration.

Sometimes the best moments in sports have nothing to do with the actual on-field play. This is one of those moments.