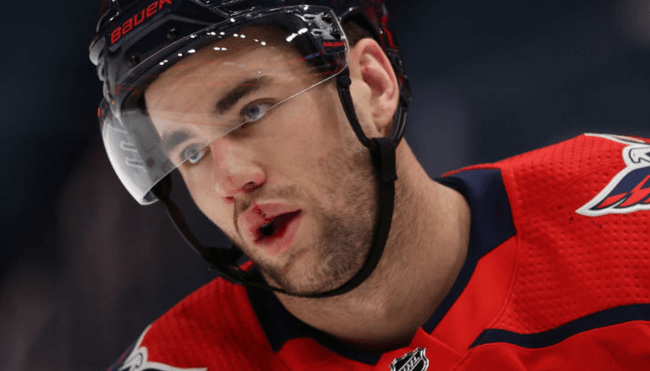 For the past few years, the NHL has conducted an anonymous poll of its players to get a read on how they view their teammates and opponents. The league understandably strays away from controversial topics in favor of questions concerning positive attributes, but it has occasionally addressed certain shortcomings, which led to Brad Marchand being named its best and worst trash-talker two years in a row.

Marchand has managed to reinvent himself a bit over the past few seasons after largely abandoning some of the questionable tactics that led many people to label him as a dirty player. He’s still a consummate pest, but he’s cleaned up his game to a point where I think most fans would agree he’s a genuinely changed man.

The same, however, cannot be said for Tom Wilson. Since being drafted by the Capitals in 2012, the forward has been suspended five times—including a 20-game ban stemming from an atrocious hit he delivered in the preseason—and has managed to rack up over $1 million in fines thanks to his inability to stop being the NHL’s version of Mr. Hankey (without any of the charm).

It’s safe to say Wilson had a truly banner season in 2021. In March, he was suspended for seven games for boarding Brandon Carlo during a contest where multiple members of the Bruins delivered some frontier justice after he was somehow allowed to remain in the game.

It took Wilson less than two months to find himself back in the headlines for all the wrong reasons after he punched a defenseless Pavel Buchnevich in the head and slammed Artemi Panarin onto the ice during a scuffle at the start of May.

However, he was somehow only slapped with a $5,000 fine (the Rangers, on the other hand, were forced to shell out $250,000 after tearing the Department of Player Safety a new one for declining to suspend him yet again).

To his credit, Wilson has put in a lot of effort in an apparent attempt to become the most hated player in the NHL, and it looks like it’s paid off based on data that was recently compiled by OnlineCasino.CA. It’s worth noting these statistics may be a bit skewed when you consider the website only looked at social media comments from the last three months of the most recent season, but 47.9% of the ones directed at Wilson were classified as negative (Panarin came in a close second but also received much more praise).

Here’s a look at the Top 10 if you’re interested. 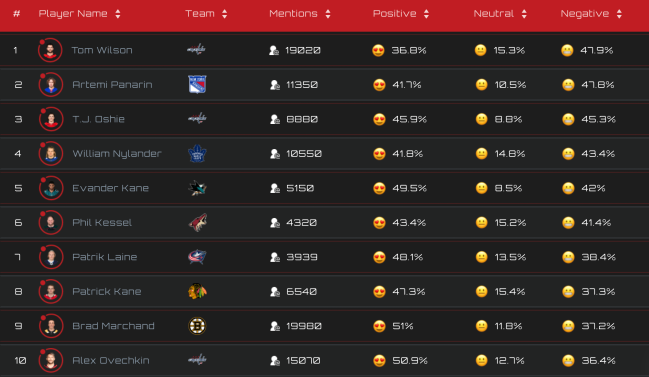 To paraphrase Bo Burnham’s ode to Jeff Bezos: Tom Wilson! You did it! Congratulations!