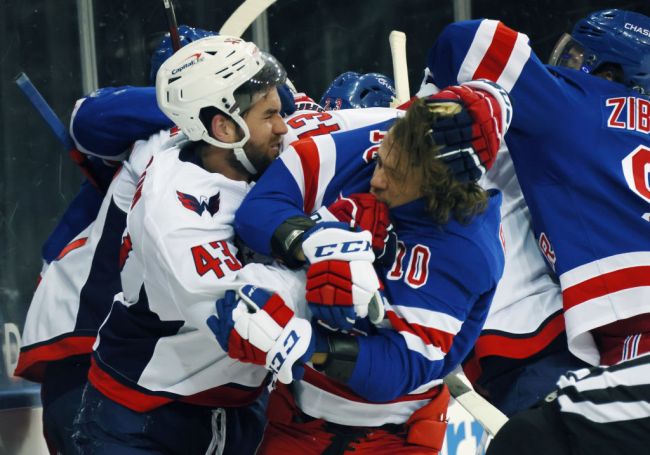 Washington Capitals winger Tom Wilson is known for being an instigator and straight-up menace on the ice with over 1,000 penalty minutes to his name, but during the Caps’ 6-3 win over the Rangers on Monday night he very clearly crossed a line.

During a scoring chance in front of the net in the second period, Rangers forward Pavel Buchnevich fell stomach-first onto the ice while battling for the puck and Wilson delivered a brutal sucker punch to the back of his head. This started a scrum, and Wilson’s punch to Buchnevich’s head was far from the worst that happened.

Artemin Panarin, the Rangers’ leading point-scorer, jumped on Wilson’s back, which turned out to be a very, very bad choice. Wilson got a hold of Panarin, who had lost his helmet, and emphatically slammed him to the ice where his head did appear to bounce off of the surface as well. Wilson wasn’t done there, however, he picked up Panarin for another slam to the ice again, this time with his face leading the way.

The first video shows Wilson, who has been suspended five times during his NHL, sucker punch Buchnevich, while the second video features Wilson tossing Panarin around like he’s some inanimate object.

Panarin left the game after serving a two-minute roughing penalty while Wilson was handed a double-minor for roughing and a 10-minute misconduct therefore not ejected from the game. Wilson went on to score a goal in the third period.

“We all saw it. There are lines that can’t be crossed in this game. There’s just zero respect for the game in general. You got one of the star players in this league now that could have gotten seriously, seriously hurt in that incident,” Rangers head coach David Quinn said after the game. “You all saw what happened, and it happens time and time again with him. Totally unnecessary.”

Quinn’s assessment of the situation was far different than Capitals head coach Peter Laviolette, who said: “it happens a lot” and “thought it was just a scrum” during his post-game press conference.

Wilson crossed the line, without question, but the fact that Wilson was able to continue the game and wasn’t handed a match penalty is an embarrassment for the NHL.