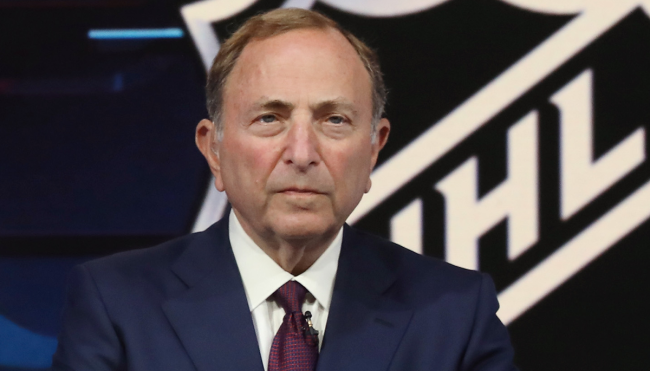 Over the course of his seven seasons in the NHL, Tom Wilson has done an incredibly impressive job establishing himself as one of the dirtiest players in the league to a point where I can only assume Nazem Kadri and Brad Marchand send him an Edible Arrangement each year to thank him for taking some of the heat off of them.

If Tom Wilson was a suspect on an episode of Law & Order: SVU, Ice-T would probably say something like “He’s got a rap sheet longer than a CVS receipt” to describe a résumé featuring suspensions stemming from five different incidents—three of which transpired in the preseason, including the blow he delivered to the head of Oskar Sundqvist in 2018 that led to the Capitals forward being hit with a 20-game ban.

The NHL justified the length of that suspension by highlighting Wilson’s “repeat offender” status, which you’d think would indefinitely apply to any player who has, you know, repeatedly offended. However, he managed to have it expunged from his permanent record after staying on his best behavior during the league’s fairly inexplicable 18-month probationary period.

However, the winger relapsed in March when he slammed Brandon Carlo’s head into the glass during a check and found himself sidelined yet again thanks to the seven-game suspension he received as a result.

If you were wondering if that might be the eye-opener that resulted in him returning to the rink a reformed man, you got your answer when Wilson grabbed Artemi Panarin’s head and slammed him to the ice when the Caps faced off against the Rangers on Monday.

It seemed safe to assume Wilson was going to get a phone call from the Department of Player Safety the next day, and it’s not hard to see why people were outraged when he only was fined a mere $5,000—including whoever wrote the virtually unprecedented statement the Rangers released in which they called for the firing of George Parros for failing to dole out justice.

Wilson and some of his teammates did find themselves at the receiving end of some frontier justice during a fight-filled game on Wednesday, but on Thursday, the NHL handed out some punishment of its own when it announced it was fining the Rangers $250,000 for having the balls to rightfully call them out.

I know the phrase “power move” gets thrown around a lot, but I can’t think of a better way to describe what the franchise did when it made the decision to put the league on blast. If Gary Bettman had failed to respond, he would’ve essentially undermined his own authority, but the decision to fine the team 50 times more than what Wilson was forced to shell out is arguably an even more disastrous look—especially when you consider who really holds the cards here.

As things currently stand, the Rangers are the most valuable franchise in hockey with an estimated value of $1.65 billion. However, they’re just one part of the massive portfolio overseen by James Dolan, who also oversees operations for the Knicks (worth up to $4.6 billion,) the arena both teams play in, and the television networks that broadcast many of their games.

Wilson’s fine was so relatively minuscule because he’s protected by the bargaining agreement that establishes the maximum amount a player can lose, which is a luxury NHL teams don’t have. With that said, the Rangers have a golden opportunity to use some of the leverage that comes with being an Original Six team in the biggest market in North America (and the billions of dollars theoretically at their disposal) to play the league like a fiddle after luring it into the perfect trap.

After all, we’re talking about the same team that stood up to the Russian government when Panarin became the target of a smear campaign earlier this season; if it could hold its own against Vladimir Putin, I don’t think Bettman should be much of a problem. You’d be hard-pressed to find anyone in the NHL’s corner when it comes to this issue, so if Dolan is willing to devote some funds to fighting this good fight by, say, offering to match the amount of any fine and donate it to charity, it’s hard to imagine how the league could turn the tables if it feels the need to retaliate against further criticism.

Don’t let us down, James. Spike Lee might hate you, but you can still do the right thing.