Violent Chaos Ensues Between Capitals And Rangers, Fans Rip Coward Tom Wilson For Exiting The Game Early With An Injury 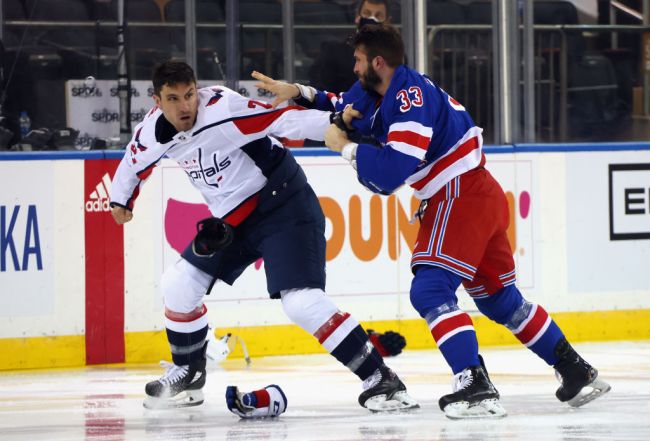 Just days after Capitals winger and noted scumbag Tom Wilson sucker punched Rangers forward Pavel Buchnevich in the back of the head and slammed Armeti Panarin into the ice head-first, there was bound to be a fight or two between the Washington and New York on Wednesday night. Panarin’s season came to an early end because of the takedown, but Wilson was only hit with a $5,000 fine by the NHL and did not receive a suspension for the incident. Bullshit.

What ended up unfolding in their first meeting since it all went down was complete and utter chaos. Things got started right away with an all-out line brawl right off the faceoff. Everybody on both sides were chucking knucks, except Zdeno Chara, who was likely told to save himself and protect Wilson later in the game.

Moments later, Brendan Smith became a Rangers legend and immediately went after Wilson the moment that the despicable schmuck stepped onto the ice. Wilson came on, Smith went right over and dropped the gloves.

Brendan Smith goes straight after Tom Wilson once he stepped onto the ice for the first time tonight.pic.twitter.com/Dxz1NNwJ22

No matter what he does or where he wants to go, Smith should forever be tenured with New York. Somebody was going to go after Wilson at some point. Going after him right away is epic. Wilson, a complete hoser, was ruled out for the rest of the game with an “upper body injury.” Whether he was actually injured or not will be seen (there is a slim chance he couldn’t keep play), but either way, fans had at him for being the coward that he is. Even Jesus got in on the action.

It's tough, having to fight someone who's standing up/facing you. https://t.co/0I3L140ZCS

Is having your head up your ass an upper or lower body injury https://t.co/CJNG5KBq5E

#Caps Tom Wilson will not return to tonight’s game (ran away and hid) https://t.co/TZTxB4PDud

whose upper body tho https://t.co/ksyTTaWN9V

After the first period, both teams had amassed more than 100 total penalty minutes in 20 minutes of play. It was a full house in the penalty box.

100 penalty minutes combined were assessed between the Rangers and the Capitals in the 1st period alone. pic.twitter.com/zqLWZlyYMo

The night was not over there. During the second, the Capitals’ Anthony Mantha tried to engage the Rangers’ Pavel Buchnevich. Buchnevich wanted none of it, but turned around and threw a nasty illegal cross-check in return. It was an unacceptable act that should not be tolerated in any setting.

Pavel Buchnevich gets a major for cross-checking Anthony Mantha and a game misconduct #NYR pic.twitter.com/yfTIkhLZNq

However, if Wilson was let off with a slap on the wrist, should the league suspend Buchnevich (which it will), the double standard would be immensely embarrassing. The NHL office already made a clown show move by letting Wilson play as planned, so the standard was set with a low bar. Is Buchnevich’s check equal to, or at least close to the level of Wilson’s punch and slam? Perhaps. Does it deserve a greater punishment? Absolutely not.

As play continued, both teams seemed to settle down a little bit and no more punches were thrown. That didn’t stop Chara from getting his two cents in. He went over to Smith and had some choice words that saw him get tossed. More than likely, he told Smith that he was toast once he stepped back on the ice— filling that “Wilson protector” role.

Zdeno Chara has some choice words for Brendan Smith and gets thrown out of the game pic.twitter.com/izQrij2uBf

The two teams will not face one another in the regular season again this year, so the fireworks between them have been put out for now. Don’t be surprised if this grudge doesn’t hang around for a few years though. Both teams already hated each other, Wilson is the most disliked player in the league, and hockey players love to beef at any chance they get.