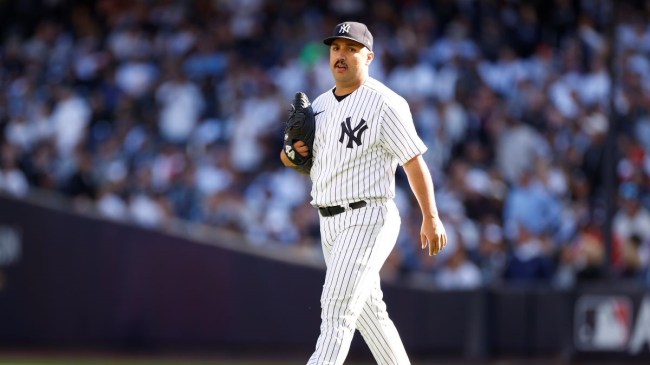 The New York Yankees entered Game 4 against the Cleveland Guardians in the American League Division Series on the cusp of a massive implosion.

New York began the season red-hot and had the best record in baseball for a significant portion of the season. But a late-season slump had some Yankees fans concerned headed into the playoffs. That concern was heightened when the Guardians took two of the first three games in the ALDS. That game Cleveland a chance to close out the series in front of their home fans.

Instead, Yankees ace Gerritt Cole had perhaps his biggest moment yet in Pinstripes, shutting down Cleveland to force a decisive Game 5 back in the Bronx.

That game was originally scheduled for Monday night, but steady rain pushed the game back to Tuesday and may have saved the Yankees’ season.

Yankees’ manager Aaron Boone originally called on right-hander Jameson Taillon to face off with Cleveland’s Aaron Civale in the series decider. Taillon had a solid regular season, going 14-5 with a 3.91 ERA. But he struggled mightily in a relief appearance in Game 2. Taillon took the loss in that game after allowing three hits and two earned runs while recording zero outs.

Needless to say, Yankees fans weren’t overly optimistic about his chances in Game 5. But in stepped mother nature to save the day.

The rainout meant one more day of rest, which allowed Boone to switch his starter from Taillon to Nestor Cortes. Cortes was a first-time All-Star this year and a Cy Young candidate. He boasts a 12-4 record and a 2.44 ERA with 163 strikeouts in the regular season. Cortes started Game 2 of the series, pitching five innings and leaving with the game tied 2-2 before getting the no-decision.

He’ll now get the ball against in the all-important fifth game.

The Guardians, meanwhile, will stick with Civale. The 27-year-old righty was just 5-6 with a 4.92 ERA and figures to have a short leash with manager Terry Franco. It will be his first career postseason appearance.

If Cortes can manage to get the job done, Boone and the Yankees will have Mother Nature to thank.