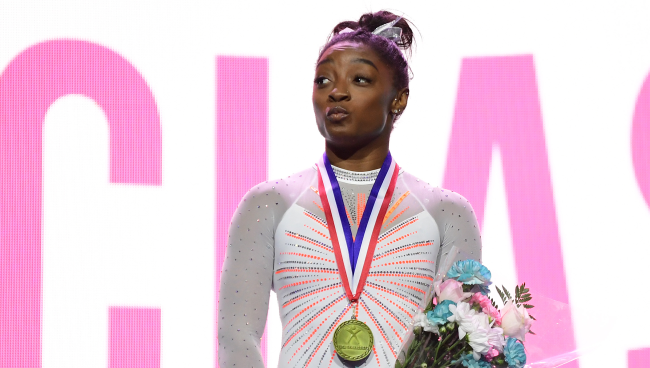 Back in August of 2019, gymnast Simone Biles’ brother Tevin Biles-Thomas was arrested and charged with the murders of three men in a Ohio Airbnb, Delvante Johnson, 19; Toshaun Banks, 21; and Devaughn Gibson, 23.

On Tuesday, a judge in Cuyahoga County, Ohio dismissed murder and other charges against Simone Biles’ brother Tevin, leading to a wild scene in the courtroom.

Judge Synenberg made the ruling based on lack of evidence, saying it was “insufficient to sustain a conviction,” and dismissed Biles-Thomas’ murder charges and acquitting him of voluntary manslaughter and felonious assault charges.

“In viewing the evidence in light most favorable to the state, it is insufficient to sustain a conviction,” said Synenberg. “The motion is granted as to all counts. Ladies and gentlemen, this matter has been drawn to a conclusion. I thank everyone for their effort and my heart goes out to the families of the victims.”

Moments after reading her ruling, a woman, now reported to be Brandie Johnson, the mother of the victim, stood up and charged at Biles-Thomas while yelling, “You’ve got to be f—ing kidding me! I’m going to kill you! He killed my baby! You know he killed my baby!”

Three sheriff’s deputies then jumped in, grabbed her, placed her in handcuffs, and hauled her out of the courtroom. Johnson was released without charges, according to a Cuyahoga County spokesperson.

“This was a horrible tragedy, three families lost three family members and you know, absolutely horrific. So, we understand emotions were running high,” said Joe Patituce, Biles-Thomas’ attorney.”But today, Tevin Biles was vindicated, what he’s waited to get for the last two and half years.”

Patituce added, “We get it, she’s angry. She was led to believe Mr. Biles was guilty, when he wasn’t, and she reacted like a mother. We don’t fault her for that. … She lost a son and we understand, and we respect the fact that she has suffered horribly, her family has suffered horribly, just like the other families, including Mr. Biles.

“I mean, Mr. Biles’ own cousin was murdered in this case and he had to sit there and stand trial with the accusation that he was responsible, murdered his own cousin, which simply wasn’t true.”

The 26-year-old Biles-Thomas’ trial in May was declared a mistrial by Judge Synenberg during jury deliberations after someone mixed legal briefs in with the trial evidence submitted to the jury and the jurors read them.