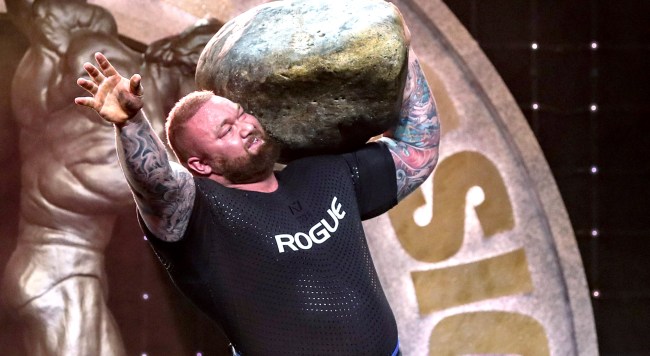 After replying to what Hall said with “that’s f–king hilarious,” Thor challenged Hall to a boxing match to be held sometime in 2021.

He also posted a video to YouTube with the title “Worlds Hardest Punch??”

Fast forward to November 2020 and Hall posted his own boxing video showing him hitting his sparring partner so hard he was coughing up blood.

So is this fight really going to happen? It’s kind of looking that way.

Earlier this month, Bjornsson made his boxing debut against Northern Irish boxer Steven Ward. Ward weighed in at 217 pounds, while “The Mountain” – a “titanweight” – tipped the scales at over 340.

They even had UFC Hall of Famer Bas Rutten and former boxing champion Carl Frampton doing commentary for the three round bout.

Amazingly, the fight went the distance, with Ward saying after it was over, “I thought he looked great, I’ve never seen a big man that size move so well. I got a bit careless and he hit me a shot that shook me to my boots.”

Bjornsson said after the bout that he had been training in boxing for over six months at the time of the fight and had a warning for fellow big man Eddie Hall.

“If you do not take it seriously I will knock you out in the first round,” he warned. “You have to train seriously.”

Oh, I think Hall is taking it seriously alright.