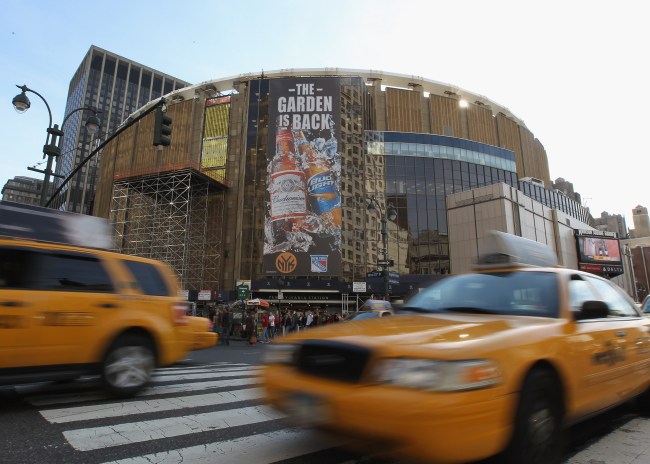 NEW YORK, NY - NOVEMBER 26: An exterior view of Madison Square Garden prior to the game between the Philadelphia Flyers and the New York Rangers on November 26, 2011 in New York City. The Rangers shutout the Flyers 2-0. (Photo by Bruce Bennett/Getty Images)

Madison Square Garden Company (MSG) (in a joint venture with Sands Corporation (LVS), who is contributing $75 million to project) has released renderings of a 360-foot-tall (500-foot-wide) glass sphere (MUST SEE), set to be built behind the Venetian and Palazzo resorts and expected to open in late 2020. The arena, connected to the resorts via a pedestrian bridge, will seat 18,000 and hold concerts, residencies, boxing/MMA and other entertainment events (like mass gaming). MSG is expected to announce plans for the construction of a 2nd sphere in London, noteworthy as the booking and marketing of London’s O2 Arena is controlled by AEG live; a direct competitor of Azoff-MSG. The two companies have a history of preventing acts from performing at the other’s venues.

Howie Long-Short: Forbes released their ’18 NBA team valuations. For the first time, every team was valued at more than $1 billion; with team values increasing by an average of 22% YOY. Over the last 5 years, team values have grown 300%. The potential for international growth (revenue growing in high-teens) has NBA teams selling at a higher multiple (8x revenue), than NFL teams (6x revenue). MSG’s NY Knicks are the NBA’s most valued franchise, worth an estimated $3.6 billion (+9% YOY, on $426 million in revenue). Forbes has the Rangers valued at $1.5 billion (+20%, on $246 million in revenue). MSG’s current market cap is $4.93 billion. If Forbes’ valuations are accurate (they tend to be low), the market is assigning literally negative value to MSG Arena (tax assessment in ’17 was $1.2 billion, not including air rights), the Forum, the Liberty, Counter Logic Gaming and a controlling stake in Tao Group.

Fan Marino: Back in November, MSG announced it would be selling its WNBA franchise to a buyer who would immediately take over control of the team’s operations. Apparently, plans have since changed, James Dolan has stated that despite “numerous interested parties” the company would continue to operate the team. The Liberty plan to move most of their games from Madison Square Garden to the 5,000-seat Westchester Arena (pending county approval), home to the Knick’s G-League affiliate. The move would save the franchise dollars, as the cost associated with holding events at the Garden are significantly higher.

WWE reported record revenue ($801 million, +10% YOY) for full-year 2017, with adjusted OIBDA (operating income before depreciation and amortization) also setting a company record ($101.6 million, +40%). For Q4 ’17, the company increased revenue 9% YOY to $211.6 million; while increasing paid subscribers to the WWE Network from 1.41 million to 1.48 million. Along with the earnings report, the WWE issued a statement announcing that Chief Marketing Officer Michelle Wilson and Chief Financial Officer George Berrios are being promoted to co-presidents (and being given spots on the board) as a reward for “their contributions to four years of record revenues and the successful transformation to a multiplatform business model.”

Howie Long-Short: WWE shares are up 62% since October 25th, 2017 (and 14% in 2018). The primary catalyst is the optimism surrounding the company’s next series of television contracts. RAW and SmackDown deals expire Sept. 30, ’19, while broadcast deals in India and the U.K. will end on December 31, 2019. It’s not just broadcast television providers that are interested in the WWE though; 70 new brands have signed on as sponsors since the start of 2015 and corporate sponsorships grew 29% YOY in 2017.

Fan Marino: Paul Levesque (Triple H) noted on the earnings call that the company is finalizing contract terms (i.e. not yet done despite rumors/reports) on a multi-year deal with Ronda Rousey. This isn’t a publicity stunt for the WWE; Levesque was clear in stating “we are her #1 focus and goal. This is her life now. She wants to be with us for a long-time.” Seems like a win-win to me; Rousey brings additional star power to a burgeoning women’s division, while she makes a lucrative living without having to be punched in the face daily. I also LOVE that she’s adopting the Rowdy Roddy Piper gimmick (or at least attire).

Tokyo2020 Has Already Surpassed Domestic Sponsorship Revenue for All Prior Olympics

The IOC is reporting domestic sponsors have already committed to spending $2.91 billion on the 2020 Tokyo Olympics, 3x their initial projections, with more partners expected to join the program. Currently 47 brands are on board and that figure does not include long-term IOC sponsors like Bridgestone, Panasonic and Toyota. With the Games still over 2 years away, Tokyo has already surpassed domestic sponsorship revenue for all prior Olympic Games. For comparison purposes, London raised just $1.1 billion for the 2012 Summer Games. Rio reported a figure that was slightly higher, but corruption linked to those Games puts the final total in question.

Howie Long-Short: The success of corporate sponsorship sales means that Tokyo’s organizing committee (OCOG) will be able to cover their projected budget of $5.6 billion “without recourse to public funding.” Japanese and Tokyo metropolitan governments will pay the remaining $7 billion. It’s worth noting that since 1960, the median cost overrun for Olympic cities has been 90%. PyeongChang is expected to go just 61.5% over their projected budget.

Fan Marino: The PyeongChang Games are underway, with Norway leading the overall medal count as of Sunday evening. Team U.S.A fans experienced their first thrill of the ’18 Winter Olympics on Sunday, when 17-year old Red Gerard took Gold in the men’s slopestyle; making him the youngest American male Gold medalist since 1928 (Billy Fiske, Bobsled). Gerard will compete again on February 24th in the big air competition. Red’s family is enjoying their Olympic experience too, Gerard mentioned he received a “video of them shot-gunning beers at 8:30 a.m.” In my next life, I’d like to come back as a Gerard or Gronkowski.

Editor Note: Digital Sports Desk put together a list of MUST-FOLLOWS for the 2018 games. The comprehensive list includes organizations, media and athletes. You’ll find everyone from @MikaelaShiffrin to @CBrennanSports to @OlympicFlame. Yes, the Olympic flame has its own social media account.