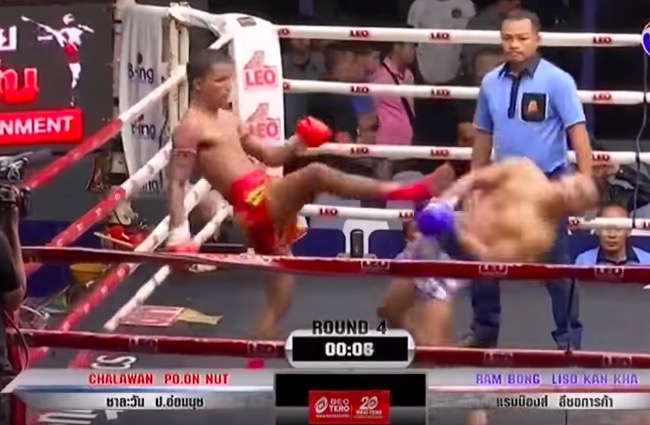 Over the years, I’ve seen thousands of knockout videos on the Internet but I’m having trouble remembering one that was ever as devastating as this. If you’ll indulge me for a moment, this kick reminds of the scene in Doctor Strange when Tilda Swinton’s character ‘The Ancient One’ punches Dr. Stephen Strange (played by Benedict Cumberbatch) in the forehead so hard he leaves his body. If you haven’t seen Doctor Strange then this is completely lost on you (video of it here), but just wrap your mind around the visual of someone getting sent into another dimension after getting mollywhopped in the forehead.

It happens around the 14:45 mark and I’ve set this video below to being at 14minutes29seconds so that you can get a little bit of a feel for the match before you watch this man’s entire life get kicked through the back of his skull.

As I said in the headline, I’m almost afraid to Google whether or not Muay Thai fighter Rambong Leesorkanka is even alive after he got his life ruined by Chalawan Por Onnut at Rajadamnern Stadium last Thursday. I’ve never been kicked or hit that hard in my life but I have to assume that there’s a decent chance you can never form sentences again after taking a beatdown like that.

(shout out to Deadspin for sharing this video)