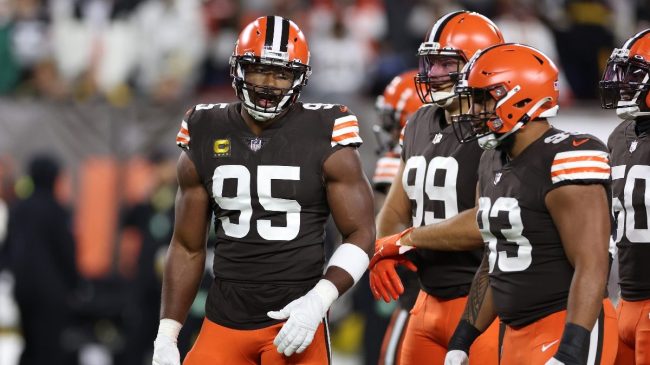 The Cleveland Browns are in the middle of a dogfight with the New England Patriots, as these teams match up against each other well. However, all eyes are on Myles Garrett right now, as the superstar pass rusher just broke a franchise record. He is an absolute sack machine and he still has plenty of time left in his career.

According to Sunday Night Football on NBC, Garrett’s strip-sack on Bailey Zappe has made him the Browns’ all-time sack leader. It is insane that he’s already broken this record, as this is only his sixth year in the NFL. Myles Garrett has been a monster throughout his career so far, and it appears he’ll be running up this record for years to come.

Myles Garrett now has the MOST sacks in #Browns franchise history. pic.twitter.com/mNUmm3tAIt

It was a brilliant play by the Browns star. He beat his man around the edge, showcased an elite ability to bend around the right tackle, and made an amazing strip sack on the Patriots quarterback. Myles Garrett entered this game with 61.5 career sacks. After Sunday’s game, he becomes the record holder of sacks for this franchise.

Considering Garrett is only 27, there’s a chance he could make some NFL history later on in his career. He has a long way to go though, as Bruce Smith recorded a whopping 200 sacks in his career after playing 19 years in the league. We’ll see if Myles Garrett can continue his streak. However, it already appears the Browns have a future Hall of Famer on the defensive line.