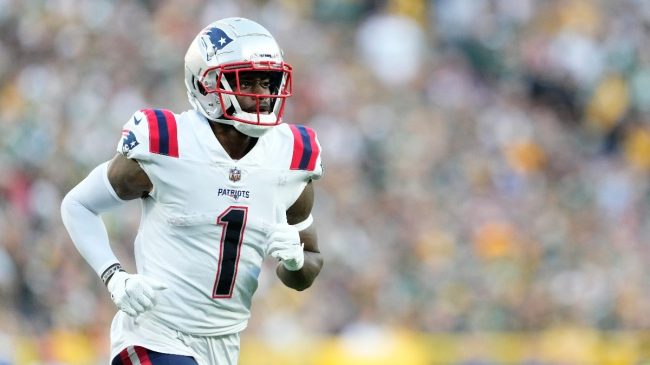 The New England Patriots have a tough matchup against the Cleveland Browns on Sunday. It should be a back-and-forth battle, as both franchises struggle to find their footing on the season. Regardless, wide receiver DeVante Parker might have made the catch of the year early on in the game.

On the opening drive of the contest, quarterback Bailey Zappe launched the ball down the field. The Patriots’ wide receiver had two defenders on him, but it didn’t matter. DeVante Parker elevated and made a wild catch along the sideline.

It was truly an amazing catch by DeVante Parker. He’s truly made a reputation for himself as a legitimate weapon on deep throws. It seems like he comes down with 50/50 balls more often than. This is the exact type of play the Patriots need from their wide receivers. Especially considering the team is down to its third-string quarterback right now.

At the end of the day though, New England was unable to capitalize on this amazing play. The Browns stood their ground and kept the Patriots out of the endzone. It’s been a noticeable problem for this team this season, but maybe it can improve once Mac Jones returns.

As for the catch, DeVante Parker certainly should be considered a “catch of the year” candidate.” He has his work cut out for him though, as we’ve seen some amazing grabs this year. Both George Pickens and Darnell Mooney have insane one-handed snags. Either way, the Patriots’ wide receiver deserves praise as well.