Myles Garrett Reportedly Met With Roger Goodell About Possible Return From Indefinite Suspension, But Still No Timetable In Place 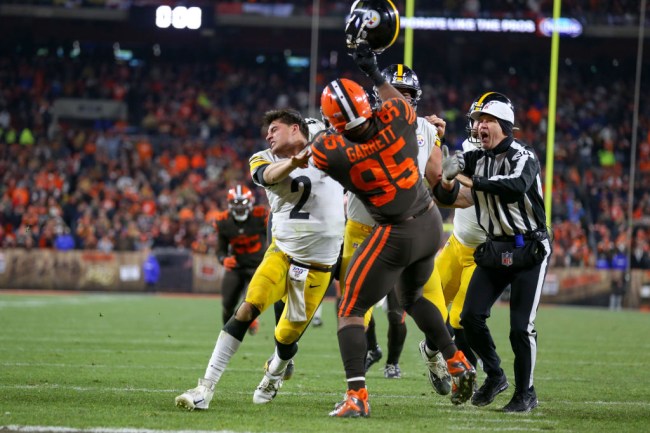 After Myles Garrett decided to rip off Mason Rudolph’s helmet then swing at him during the Browns – Steelers Thursday night matchup he was handed an indefinite suspension by the NFL. The only details with the initial suspension were that it was indeed indefinite and without pay, but nobody knew what the timetable for ‘indefinite’ was.

According to Mary Kay Cabot of the Cleveland Plain Dealer, Garrett met with commissioner Roger Goodell and other NFL representatives about reinstatement to the league, but there is still no timetable for a return. Meeting with Goodell prior to his reinstatement was part of his suspension details.

Breaking: #Browns Myles Garrett met with #NFL representatives this morning in NY including Commissioner Roger Goodell about reinstatement from his indefinite suspension. No timetable yet.

Garrett, the first-overall pick in the 2017 NFL Draft, played only 10 games in 2019 picking up 29 tackles and 10 sacks, which are rather strong numbers in just 10 contests. He was certainly on pace for a big year, but it was all shut down after the brawl with Rudolph.

Ian Rapoport elaborated on the situation involving Garrett essentially explaining that there isn’t really an update on the situation other than Garrett will be reinstated provided he completes all that is asked of him.

The expectation is that #Browns pass-rusher Myles Garrett will be reinstated, sources have said, provided he completed the back end of all that was required — including counseling. No firm word from the NFL on when he’s officially back, though nothing is said to be coming today.

Related: Myles Garrett’s Quote From September About Not Being A Dirty Player Certainly Didn’t Age We