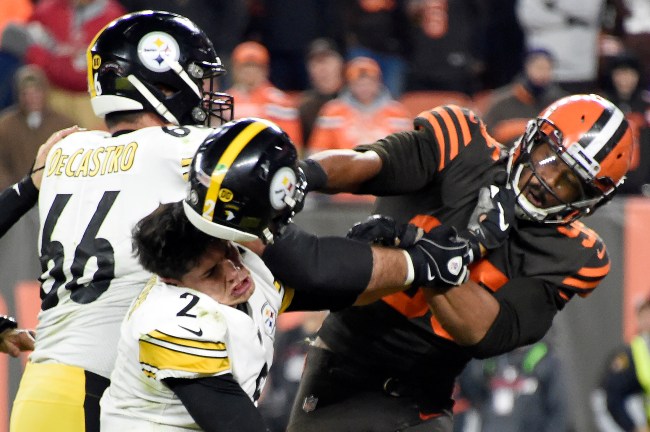 Myles Garrett did the one thing no football player should ever even consider doing; use a helmet as a weapon on an opposing player. But, in the midst of a brawl at the end of a Cleveland Browns-Pittsburgh Steelers game earlier this season, the Pro Bowl defensive end lost his cool and did just that, connecting with a violent smack to the head of Steelers signal-caller Mason Rudolph.

The entire thing was ugly AF, with Garrett (rightfully) getting lambasted by everyone in the media, ultimately getting an indefinite suspension and, while apologetic for his actions, offering up some details about what drove him to such an insane state of mind.

While the Myles Garrett-Mason Rudolph incident was a real embarrassment for both teams — and, more than anything, the former No. 1 overall pick, who now has a reputation as a dirty player — it seems like a few fans found it to be quite amusing, as we’ve seen a few Browns fans even create a Rudolph pinata to smack with a helmet. Pure class, right?

One Browns fan took things to a whole new level, though, because the person actually got a detailed tattoo of the helmet smack on their body, which begs the question: What in the hell is wrong with some people? Take a look at the piece of “art” below.

Now, I’m not usually one to judge another person’s tattoo decision, but, damn, how in the hell is a person going to get this inked on them for life? Sure, the Browns-Steelers rivalry is heated and has been tense for the past 40-plus years — as a Browns fan myself, I know that — but not even being blacked out would lead me to even consider doing something like this. Maybe I’m just being a buzz kill, though.

That said, I’ll admit that the tattoo itself is pretty impressive, with the detail and quality top-notch. Still, come on, this is over-the-top a little nuts.

Sports fans go to great lengths to show loyalty to their teams, and, as we’ve seen plenty of times before, Cleveland Browns fans are some of the most passionate (or insane) supporters in all of sports. But to think that some person will be walking around 50 years from now with an accurate depiction of Myles Garrett nailing Mason Rudolph on the head with a helmet is just a little bit too far.