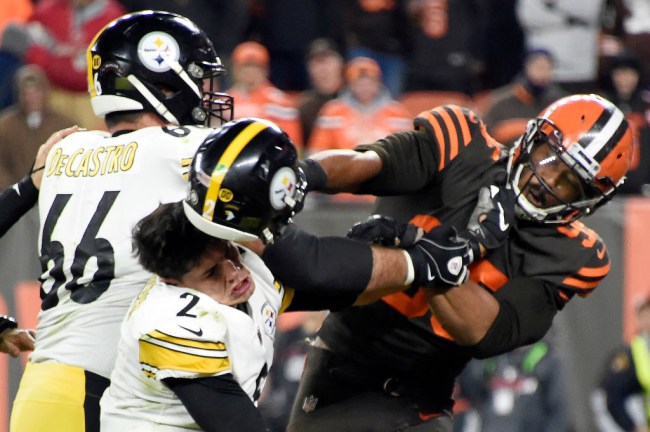 Myles Garrett recently treated us to one of the uglier on-the-field incidents the NFL has seen in a while when he ripped off Mason Rudolph’s helmet and swung it at the quarterback’s head during a Thursday Night Football matchup and the fallout was swift and immediate, as the league handed the Brown an indefinite suspension for his role in the altercation.

It’s worth noting Rudolph didn’t appear to be entirely blameless, as video evidence showed him planting his foot in Garrett’s crotch as the two men scuffled in the closing seconds of the contest.

However, last week, Garrett dropped a bomb while unsuccessfully attempting to appeal his punishment when he told the NFL the real reason he’d flipped his lid (and grabbed Rudolph’s) was that the Steeler hurled a racial slur in his direction during the fracas—a claim the quarterback swiftly denied.

The news came as a huge surprise to many people—including a number of Garrett’s teammates, who said the defensive end never mentioned the allegation prior to his hearing, which caused plenty of spectators to wonder exactly what the hell took him so long to bring it up.

Now, according to Larry Brown Sports, Fox Sports‘ Jay Glazer has introduced a new twist by claiming he and some members of the Browns organization were aware of Garrett’s claim after the game ended but that things were kept under wraps for reasons that aren’t entirely clear.

Here’s what the insider had to say:

“The Browns, I think, were very nervous that he was going to reveal this in the interview with me on Sunday.

Just talking to Myles, I was trying to get out of him whether or not he would confirm it for me. I got the sense that he wasn’t going to and didn’t want it out publicly because it would be bad for the league. He just thought it was going to be confidential inside of that appeals process.”

When you consider Garrett was immediately painted as the bad guy, you have to wonder exactly why he’d be so concerned with helping the league save face by not accusing Rudolph in a public setting.

Additionally, when you consider how salacious the accusation is, it’s kind of odd that he thought it would stay within the confines of his appeal hearing (did he expect the NFL to punish Rudolph without explaining why it did if it had found the allegation credible?).

As things currently stand, the league has found no evidence to back up Garrett’s claim and Rudolph continues to proclaim his innocence, so while the Brown maintains he heard what he heard, he’s going to have to dig up some receipts if he wants to get public opinion on his side.