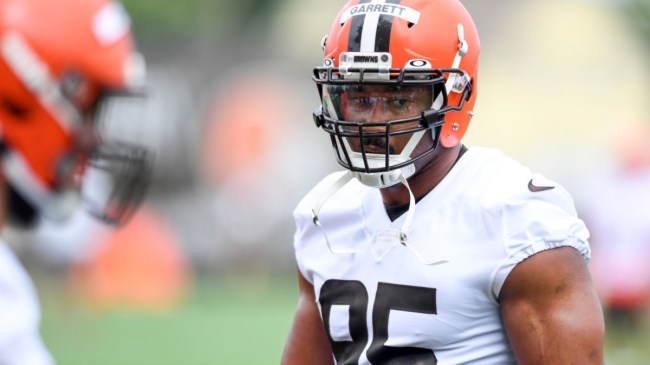 Ever since Baker Mayfield was traded from the Cleveland Browns to the Carolina Panthers, football fans have had the Week 1 matchup circled on their calendars.

However, while fans have been anticipating the grudge match, neither Baker nor his former teammates were willing to lend the matchup any added importance until recently.

Earlier today, a report emerged on Baker’s true feelings about the matchup against his former team. Buffalo Bills reporter Cynthia Frelund revealed that she talked to Baker about the upcoming matchup after the Panthers’ final preseason game and he told her “I’m going to f*** them up”.

After hearing about this statement from Baker, one of his former teammates responded to the quote. Browns edge rusher Myles Garrett told cleveland.com’s Mary Kay Cabot that the Browns will use the comment from Baker as fuel for Week 1.

Myles Garrett reacts to Baker Mayfield’s “f*** them up” comment

Myles Garrett tells clevelanddotcom the #Browns will 'take it and we'll use' Baker Mayfield's 'I'm going to (expletive) you up' remark for motivation in opener vs. #Panthers https://t.co/NQeKiOmDJC

We’ll take it and we’ll use it, and I’m hoping for a great matchup. I don’t think any less of him because he’s going out there and doing the same thing he did when he was with us. He’s the same guy personally, and maybe we’ll see a different Baker when we get on the field. Who knows?

After spending most of last season injured because of the repeated shots he took behind a shaky Browns offensive line, Garrett probably shouldn’t be high on the list of guys Baker wants to fire up ahead of this matchup.

We are still nearly two weeks away from Baker Mayfield and the Panthers taking on the Browns, which leaves plenty of time for these teams and the fans to keep getting fired up for the matchup.