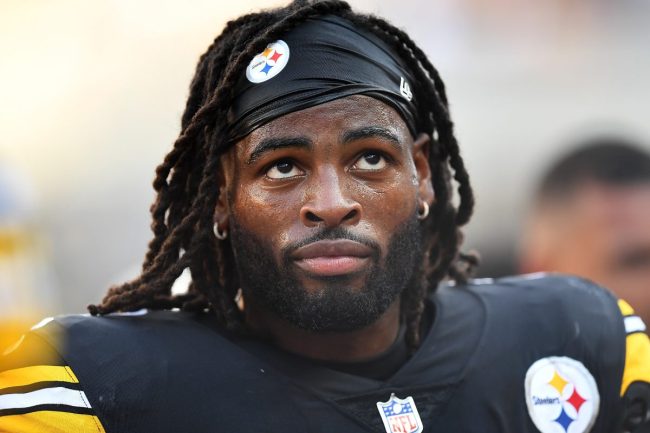 Najee Harris is gearing up for year two in the NFL. The Steelers running back figures to be a big piece of an offense that’s rebuilding at the quarterback position.

Out is Ben Roethlisberger. In is Mitchell Trubisky.

The new signal caller will rely on his bruising back as he settles into the offense with Pittsburgh. Harris racked up 1,200 rushing yards as a rookie with the Steelers while also hauling in 74 catches for 467 yards. The former first-round pick found the endzone 10 times to lead the team.

While his production in Year 1 was solid, he’s hungry to build on the campaign. And with the passing game likely to see some hiccups with a new leader under center, Harris should be the focal point of the offense.

With that said, much of his offseason has been dedicated to training, though you’d think he’s taken some time for himself over the summer.

The tailback was asked this very question in Pittsburgh’s latest preseason game against the Lions, and his response caused quite a reaction from NFL fans.

Najee Harris was asked by a reported if he’s had any fun over the offseason. His non-response had fans joking that he might’ve had a little too much fun which he wasn’t able to expand on in the interview.

Najee Harris didn’t even know where he was during this interview lmao pic.twitter.com/sNPzlER0l5

Harris freezes before saying, “No, probably went to Mexico. I think that might be it. Other than that, just training.”

The response had fans joking that maybe he had a little too much fun.

That little smile he gave before “did you have any fun?”😂😂😂 that guy enjoyed his offseason

Harris got on the field for the first time this preseason against the Lions after missing the Steelers’ first two contests. He rushed for 10 yards on four carries in limited action.

After the game, he clarified why he’s been on the sidelines for the majority of the preseason.

“It was good to get back out there. Kind of rusty. I’ve been down for about four weeks… I had a sprained Lisfranc. That’s why I was out for the majority of the camp.”

While Lisfranc injuries can be serious, it seems that Harris’ sprain was mild. He will be ready to roll come Week 1 when the Steelers take on the reigning AFC Champion Bengals.