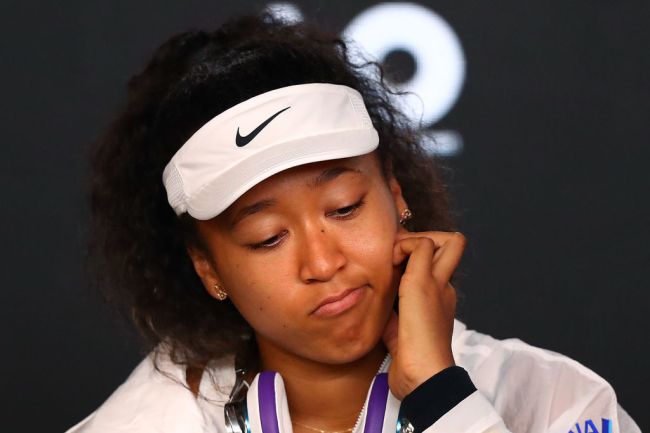 Naomi Osaka decided to take questions during a pre-tournament press conference ahead of the Western & Southern Open in Ohio, her first tournament since her early exit in the Tokyo Olympics. Her sit down with the media was not drama-free as she began crying during the press conference.

Osaka boycotted the media altogether earlier this summer citing depression and anxiety battles sharing that interviews make her “really nervous” and she finds the whole press conference setting “stressful.” She began the press conference in Ohio by answering questions regarding mental health.

The Question That Made Naomi Osaka Cry During The Press Conference

Paul Daugherty of The Cincinnati Enquirer then asked the following question via Zoom: “You’re not crazy about dealing with us, especially in this format. Yet you have a lot of outside interests that are served by having a media platform. How do you balance the two?”

That is a completely reasonable question to ask Osaka who has made an endless number of headlines by not speaking with the media yet continuing to get rewarded by the press both from a publicity viewpoint and monetarily.

Related: Naomi Osaka Is Boycotting The Media And The Media Is Awarding Her With The SI Swimsuit Cover

During Osaka’s media boycott, Netflix released a documentary about her, she’s been on the cover of Vogue, been featured in her own Sweetgreen commercial, was on the cover of Time, has her own Barbie doll, and most recently landed the Sports Illustrated swimsuit cover.

According to Daugherty, he asked the question twice before Osaka took a couple of 30-second pauses before delivering a thoughtful response. They had a bit of a back-and-forth with one another, with Osaka trying to better understand the question and Daugherty delivering it in a couple of different ways. It got to the point where the moderator suggested moving asking Osaka if she wanted to take the next question.

After taking a couple of pauses before answering Daugherty’s question, she broke into tears and left the press conference entirely before returning and taking a few more questions.

Naomi Osaka bursts into tears and exits podium while addressing how she has felt since withdrawing from French Open. pic.twitter.com/xBn8XRF8FB

When it was all said and done, Osaka did deliver a very strong answer to Daugherty’s question. Daugherty himself wrote that her answer was “Honest, thoughtful. . . and unlike any answer I’ve ever gotten in 34 years covering sports in Cincinnati.”

“I holed up in my house for a couple of weeks’’ after the French Open, Osaka said. “I was a little bit embarrassed to go out, because I didn’t know if people were looking at me in a different way than they did before.’’

“In the first place, I’m a tennis player that’s why a lot of people are interested in me. I would say in that regard I’m quite different to a lot of people and I can’t really help there are some things that I tweet or some things that I say that kind of create a lot of news articles and things like that and I know that it’s because I’ve won a couple Grand Slams and I’ve gotten to do a lot of press conferences that these things happen, but I would also say I’m not really sure how to balance the two. I’m figuring out at the same time you are.”