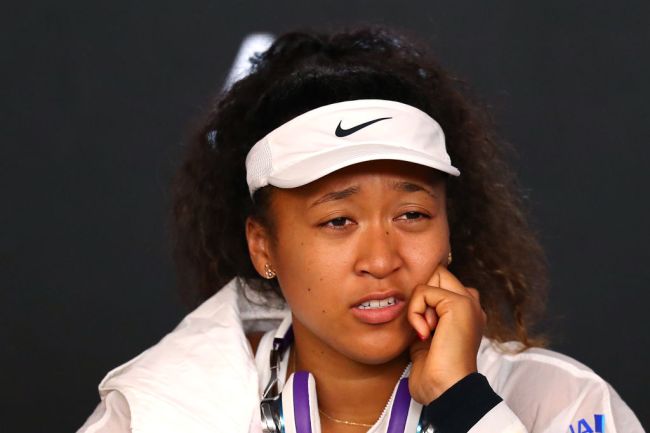 The 23-year-old pulled out of the French Open after she refused to do post-match interviews because she gets “really nervous” and finds the whole press conference setting “stressful.” Her words, not mine. Her media boycott continued into Wimbledon, where she elected not to participate, citing depression and anxiety battles.

One might think that someone trying to avoid the media at all costs while dealing with anxiety and depression would remove herself from the press at all costs. You may also assume that the media wouldn’t want anything to do with someone that’s refusing to speak with them.

That hasn’t been the case at all, however. The media has only been more obsessive over Osaka since she decided she wasn’t going to speak to the press anymore.

Since Osaka began boycotting the media, Netflix has released a documentary about her (which was her idea in the first place), she’s been on the cover of Vogue, been featured in her own Sweetgreen commercial, was on the cover of Time, has her own Barbie doll, and most recently landed the Sports Illustrated swimsuit cover.

Appearing on the cover of three of the most popular magazines on the planet and releasing a personal documentary for the world to see doesn’t seem like typical moves for a self-described introvert such as Osaka, but here we are.

With that being said, most of Osaka’s latest ventures were agreed upon and took place ahead of her media boycott. She explained in a since-deleted tweet that the SI swimsuit shoot took place sometime last year, but that would indicate that she only became a media hater and “introvert” over the span of the last year.

It seems hard to believe Osaka would decide to be anti-media after becoming a global superstar while partaking in all of those (handsomely paid) experiences previously mentioned.

At the end of the day, Osaka has remained a media darling without actually talking to the media. She checks all the boxes when it comes to a superstar athlete in the United States today, not by just being an all-world tennis talent, but by being vocal (when she feels like it) about social justice issues around the country.

SI Swimsuit editor-in-chief M.J. Day said as much when talking about Osaka landing the cover:

“We celebrate Naomi for her passion, strength and power geared towards consistently breaking barriers when it comes to equality, social justice, and mental health.”

So, why exactly is Osaka boycotting the media?

For some reason, Osaka seems to think that the media should cater to everything she wants. She wants to blow up and re-create the entire media setup, simply because she’s not a fan of how things are done now.

She wrote about it in an op-ed for Time, which she and her team clearly had total control over.

“In my opinion (and I want to say that this is just my opinion and not that of every tennis player on tour),” Osaka wrote for Time, “the press-conference format itself is out of date and in great need of a refresh. I believe that we can make it better, more interesting and more enjoyable for each side. Less subject vs. object; more peer to peer.”

Her bright idea to make press conferences more enjoyable? Not doing them. Osaka thinks athletes should have “sick days” they can use to skip out on media sessions.

“In any other line of work, you would be forgiven for taking a personal day here and there, so long as it’s not habitual. You wouldn’t have to divulge your most personal symptoms to your employer; there would likely be HR measures protecting at least some level of privacy.”

Osaka has a net worth of well over $25 million, can play tennis on the sport’s grandest stages no problem, be the subject of a documentary, and pose for SI, but fifteen minutes with the media – tennis media for that matter – is just too difficult, because she doesn’t like the system.