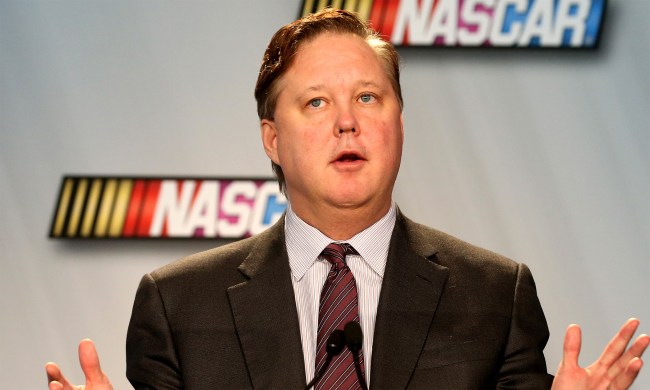 The 57-year-old France was named CEO and Chairman of NASCAR in September of 2003 by his father Bill France Jr, a position he held until August 5, 2018.

It was on that date that France was arrested in New York for DUI and possession of a controlled substance (Oxycodone). He took an “indefinite leave of absence” that turned permanent when his brother Jim France officially took over full control of the auto racing sanctioning body.

Steele started the parody Twitter account “Drunken Brian France” in February of 2014, well before France was arrested for DUI.

However, according to the lawsuit, as reported by Yahoo! Sports, “Steele’s activity through @drunkbrianf is under the guise of [Brian France]. This includes the use of [France’s] name in the account name, the account handle and the use of a photograph of [France] as the account profile picture.

Really? Are people really being fooled into thinking that the former CEO of NASCAR runs a Twitter account called Drunken Brian France?

It says right in the bio for @DrunkBrianF, “The quintessential drunk & oxyfied idiot destroying what my family spent 60+ years building in NASCAR. You can’t be this stupid sober (Parody).”

The suit also claims that France has suffered “emotional distress” due to the “highly offensive” tweets.

He is seeking unspecified damages “in excess of $15,000” and a jury trial.

Steele responded to the lawsuit on, you guessed it, @DrunkBrianF.

The suit also caught the attention of other parody Twitter accounts as well as numerous NASCAR fans.

Settle out of court, you should get away with it for a six pack of beer and a handful of pills.

Honestly I'm amazed a parody can be done so well of a man who already is in self parody mode.

“Drunken Brian France” is a twitter parody account. “Brian France the drunk” is the former CEO of NASCAR. We all know the difference.