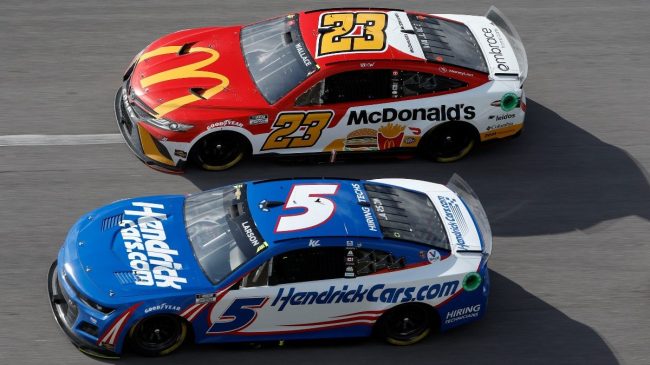 The South Point 400 is officially underway as everyone is racing for playoff position. However, things took a turn as Bubba Wallace and Kyle Larson got involved in a wreck. To make matters worse, the two racers got into a fight afterward, making it an ugly situation.

In the middle of the race, Kyle Larson was seen pinning Bubba Wallace up against the wall. There was a minor bump, but nothing major. It was definitely something you’d expect to see in a NASCAR race. However, things went south when Wallace spun out Larson altogether. Luckily, there were no injuries in the wreck.

Wallace spins him out, and #NASCARPlayoffs driver Christopher Bell is involved! pic.twitter.com/TlxcEV5T6q

When the dust just began to settle, Bubba Wallace approached Kyle Larson to confront him in the middle of the NASCAR race. He clearly wasn’t happy with how everything transpired. Even so, Larson didn’t want any part of the altercation while Wallace continuously confronted him.

Bubba Wallace is NOT HAPPY with Kyle Larson.

Some pushes and shoves after they wreck. #NASCAR pic.twitter.com/aaAn0idrJp

Although Wallace was incredibly frustrated, it appears NASCAR fans see him in the wrong. Many don’t think Larson purposely pinned his opponent against the wall. Additionally, Bubba Wallace’s decision to spin out Kyle Larson isn’t sitting well with the fanbase either.

I love Bubba but I’m not defending that

It’s really not a great look for Bubba.

Bubba should be suspended for wrecking Larson like that.

Meanwhile, Larson receives praise from the fans for how he handled the situation.

Kyle won’t fight back, makes me respect him even more.

Maybe these two will eventually settle their differences. In the meantime, NASCAR is sure to look into the situation and potentially dish out discipline for Bubba Wallace or Kyle Larson. In the end, this is a bad look for Wallace.