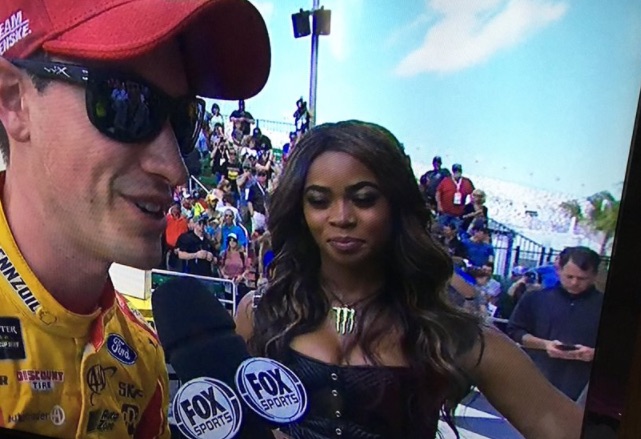 People love getting mad about the stupidest stuff. In this era of hot takes and manufactured outrage, the Twitter hive mind zeros in on something that’s not a big deal at all and makes it a huge deal. The latest victim of such outrage comes from the Joey Logano’s win at the 2017 Monster Energy NASCAR Cup Series race in Dayton, formerly the Sprint Series race. NASCAR fans are ticked off because Monster recruited a couple of scantily clad “Monster Girls” to show on TV, irking fans who don’t enjoy beautiful women alongside their stock car racin’.

I feel bad for the girls. Hopefully Monster and NASCAR — which is experiencing a massive year-over-year ratings dip — doesn’t make cuts because of this faux-outrage. I think we can all agree that it’s a nice addition to the race.

Pretty girls and racing go together no argument. However Monster drink I think this is too much. NASCAR IS A FAMILY SHOW!!! pic.twitter.com/wpPnajua6D

For the special few who were disturbed by the Victory Lane attire of the Monster Energy girls today, I offer a history lesson. #NothingNew pic.twitter.com/jxhKy4hYOI

Ya @NASCAR & @MonsterEnergy need to rethink those uniforms for the Monster Energy Girls if they don't want naughty jokes.

@NASCAR @NASCARONFOX Hope y'all get them some clothes for the 500 https://t.co/yuzwwgzqby

Wow! Sprint Cup girls were replaced with Monster Energy hookers!!! Really??? NASCAR the purpose of these girls unnecessary, always has been!

Already see people complaining how the monster energy girls are dressed really get over it.

Those Monster girls make me uncomfortable.

Meanwhile, the Monster girls themselves have a great attitude about the whole thing: