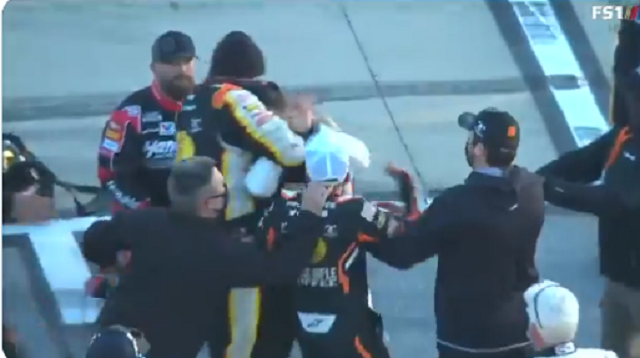 Things got a bit heated during today’s NASCAR EchoPark 250 race at the Atlanta Motor Speedway.

During a pitstop. driver Noah Gragson backed his car into Hemric’s car which forced Hemrich’s crew to scamble on pit road

After the race, a pissed off Hemrich confronted Gragson and all hell broke loose.

Gragson explained what happened that led to the altercation while also taking a shot at Hemric.

Here's what Noah Gragson had to say after the fight: pic.twitter.com/4B2rS3WDlQ

“I don’t know why he’s mad,”. “We were behind him coming onto pit road because we chorded our right front tire, and then he was in our pit box. I had to come around him, and I’m not really sure why he was there, but (I) had to back up and get there. … I’d be mad if I was in his shoes too. Just based off what he’s done in his career.”

Here’s Hemrich’s side of the story.

"There's a hole in the nose of my car and he got popped in the eye. Where I stand from, we're in good shape."@JamieLittleTV talks with Daniel Hemric after the fight: pic.twitter.com/PUpcvK2pVY

“When I pulled into my box, we had a guy who went to leave at the same time in the box behind us. And it created (for) me to have to go long, pull in the No. 9 box, and back up,”. “I guess he was oblivious to what was going on and what my situation was, so by the time the No. 9 got in his box he crammed it in reverse and purposely drove the back of his car through the front of my Supra.