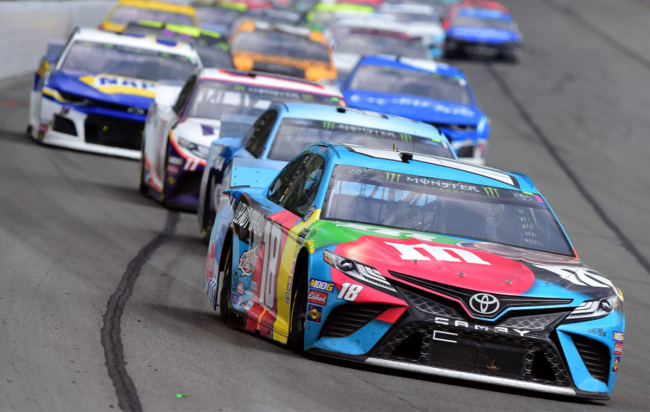 It’s hard to believe that we’re just over a month shy of the entire planet grinding to an abrupt stop. That halt included the world of sports betting, and those first couple of months were tough for anyone who likes to get in on the action here and there. After spending so much time riding the highs (and, more often than not, lows) of wagering on athletic events in all shapes and forms, I know I’m not the only person who was a bit lost when basically everything disappeared in an instant.

After a while, a few gambling opportunities began to poke their heads out of the ever-growing weeds. Major League Baseball may have had to delay its season, but if you like throwing down money on the sport, the KBO League came through in the clutch. I personally stayed away from that realm because I don’t know my Doosan Bears from my SK Wyverns (or even know what a wyvern is ), but there was another I happily embraced when it made its grand return: NASCAR.

I was a NASCAR fan prior to the arrival of the pandemic and got my first taste of what it’s like to bet on the sport during last year’s Daytona 500. While I cashed in after Denny Hamlin took home the checkered flag, the money was the last thing on my mind after Ryan Newman was involved in one of the most horrific crashes in recent memory just before the finish line.

While that particular win left a bit of a sour taste in my mouth, I’ve gotten to taste sweet, sweet victory a few times since after hopping all aboard the NASCAR betting bandwagon, which I can confidently say is the most underrated betting experience in the world of sports.

First off, you’d be hard-pressed to find many athletic events capable of giving you more bang for your buck than NASCAR races, as Hamlin is the favorite heading into this year’s Daytona 500 but is still currently listed at +700, which should tell you everything you need to know about how unpredictable the outcome usually is.

Buckle up, the Daytona 500 begins on Sunday 🏁 pic.twitter.com/AMwKyyDYLp

One of the best parts of NASCAR is its overall parity, as unlike some other racing series (*cough* Formula 1 *cough*), there’s always a pretty even playing field. For example, of the 40 cars taking to the track on Sunday, there are probably 20 teams (if not more) that all have a pretty solid chance of crossing the finish line first.

If you don’t know anything about auto racing, you might be hesitant to give betting on NASCAR a whirl, but it’s honestly not as imposing as you might think. There’s plenty of easy-to-access information out there you can use to your advantage when making your picks, as most drivers have a couple of tracks where they traditionally feel more at home. The kind of track they’re racing on comes into play as well, as NASCAR will return to Daytona International Speedway next weekend for a competition held on the road course, where drivers like Martin Truex Jr. and reigning champion Chase Elliott will have more of a chance to thrive.

There are a few ways you can approach betting on NASCAR, but my preferred strategy is to hedge by placing smaller bets on a few drivers as opposed to going all-in on a single one. For example, I’ve spread out my wagers over five different Daytona 500 participants this year, figuring that even if the majority of them are hampered by crashes or mechanical issues, there’s still a good chance at least one of them will be within striking distance by the end of the day.

You also aren’t limited to picking the winner, as you can also do some cleaning up if you correctly predict a driver will finish in the top three, top five, or even top ten (although there are obviously diminishing returns with each tier.) I’m of the opinion that if you think someone has a shot at earning a podium appearance, you might as well bite the bullet and bet on them to win, but it’s nice to have the option to take a more conservative route if that’s your thing.

If you want to get a little weird, you can even bet on the company that manufactures the car that comes away with the W, which can be a fun little endeavor when you consider there are only three options. Ford and Chevrolet make up the bulk of the field, so they’re a solid bet based on probability alone, but you also don’t want to sleep on Toyota, which usually only has a handful of cars but are represented by powerhouses like Joe Gibbs Racing and Denny Hamlin’s new 23XI Racing team, which are both using Camrys.

However, I’m personally partial to what I consider the most objectively enjoyable option when it comes to betting on NASCAR: head-to-head picks. It’s pretty straightforward: you’re presented with two drivers and all you have to do is predict who will have the better finish. It’s an incredibly simple way to spice things up a bit, as even if the front of the pack isn’t shaping up as you may have hoped, you can still get literally and figuratively invested in battles taking place in the middle of the field.

As with any gambling endeavor, you’re not always going to win, and while this is admittedly a bit masochistic, I kind of enjoy the wide variety of ways you can have your heart broken. Even if it looks like it’s all but over with a few laps to go, you never know when a tire could blow, an engine may explode, traffic gets a little gnarly, or a driver runs out of fuel because one of the guys in the pits forgot to carry the one. Those are all devastating ways to lose, but I’d be lying if I said it’s not a fun tightrope to walk.

If you haven’t gotten the chance to experience the wonders of betting on NASCAR yourself, the Daytona 500 is the perfect time to start and BetMGM is the perfect place to get some skin in the game. Feel free to thank me later.