Mikael Granlund Puts The Team On His Back, Pushes Predators To Win With Wild Last-Second Goal Before Scoring OT Winner 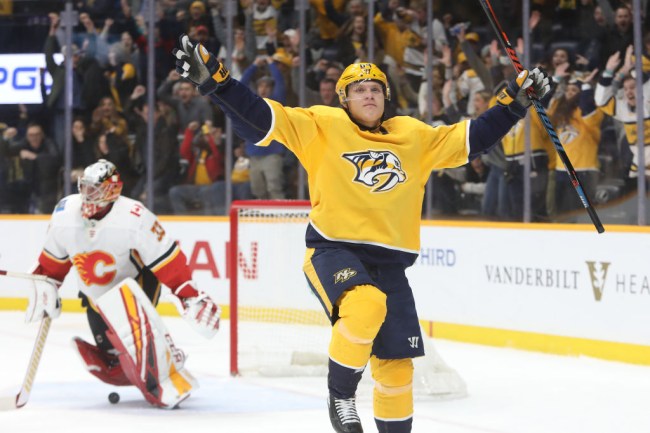 The Nashville Predators welcomed the Calgary Flames to town on Thursday night in a pivotal Western Conference matchup as the two squads continue to battle for Wild Card positioning.

The game certainly lived up to the hype as it proved to be a back-and-forth contest. Things were looking very well for the Flames late in the game as they held a 3-2 advantage in the third period. In fact, Calgary had the win in its back pocket, but then Mikael Granlund happened.

The Preds managed to cycle the puck one last time in their offensive zone with 10 seconds left. Ryan Ellis threw the puck toward the net which ended up behind the cage on the stick of Filip Forsberg with under two seconds left. The game was over, but then it wasn’t as Granlund somehow poked the puck home with 0.1 seconds left on the clock delivering one of the more electric moments in a regular-season game in quite some time.

With the momentum very clearly on Nashville’s side heading into overtime, Granlund decided to put the team on his back.

The Finn was able to break into the offensive zone and tried to zip a pass over to Matt Duchene, but the puck deflected off of a defender falling right to Granlund in the slot before he put it home to give the Predators the stunning win.

Mikael Granlund scored with one second remaining in regulation and then scored the @EASPORTSNHL OT game winner… did someone say hero? pic.twitter.com/cHmxT2P4RB

As one might imagine, Calgary netminder David Rittich was big mad and let out his frustrations by beating the hell out of the boards with his stick.

This is a unique way to do a bat flip. pic.twitter.com/raE8s1ltRZ

The Flames still hold the top Wild Card spot in the West with 73 points on the year while the Preds are in the No. 2 Wild Card spot with 72 points with two games in hand to both Calgary and the other two teams chasing them, Winnipeg and Arizona.