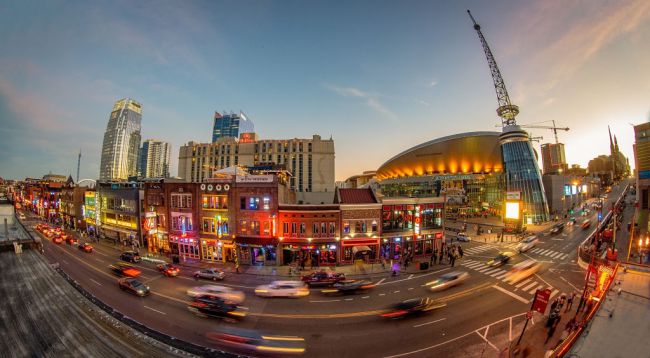 Nashville, Tenn. fully reopened on Friday for the first time in over a year. With capacity restrictions and the mask mandate lifted, bars were packed and thousands of people flocked to Broadway to live it up all weekend. Even Luke Bryan stopped by!

Traditionally in the city, visitors start flowing in on late Wednesday evening or early Thursday morning and plan to stay for an extended weekend. Thus, the party begins early in the day. You’ll see the wagons full of day-drinkers start to circle around 10:00am.

Some highlights from Nashville’s first weekend back.

It started on Friday afternoon.

metro nashville fire going to 307 broadway, at Jason Aldean's Kitchen + Rooftop Bar, for an unconscious person, it's 2:35pm on friday, welcome to the weekend folks…31 year old female passed out in the rooftop bathroom

Not but a few hours later, the rooftop patios were already packed.

TUNE IN NOW: As Nashville reopens, News 4 is live on Broadway with team coverage for the first day of the reopening of the Music City. https://t.co/FwvNfM7nUH https://t.co/q6geb5EWg5

Although the shoulder-to-shoulder bar crowds are one sign of the city being back, the bachelorette parties are the real tell. They’re everywhere.

Lower Broadway in #Nashville is back. So are the brides and their maidens! pic.twitter.com/5nj2ICEVlf

What’s cool about Broadway is that all of the bars are within walking distance. It’s one big stretch of the city with at least 32 places to grab a shot and a beer. As a result, navigating the streets can be a maze. Scooters and drunks are everywhere. Here is what it looked like at 7:00pm on Friday:

Lower Broadway tonight at 7:00. Crowds are back to pre-pandemic levels. I have never seen this many people downtown except for a holiday or special event weekend. #Nashville pic.twitter.com/CxkiTjBhc4

Other people chose a different approach to getting around.

This is how you roll on Broadway in Nashville #Cheers pic.twitter.com/rnDaCMuRHt

There are many great ways to get around Nashville. This is not one of them.

metro police have report at broadwy and 3rd ave north, report of an uber driver that is driving around while intoxicated

Look at the sheer number of vehicles trying to get onto the busiest street in the city.

Lower Broadway looks to be back to normal on this Friday night. All COVID-19 restrictions have now been lifted. @WSMV pic.twitter.com/K25nKvZnFQ

As well as their close proximity, each of the bars has its own spin on live music. The talent varies as you work your way up to the “big name” bars. You never know who you might see! Luke Bryan decided to get a night away from the wife and kids to check on his bar downtown.

YES WE SEEN @LukeBryanOnline last night at his bar here in Nashville 😍 pic.twitter.com/njiKZFreWz

After a few drinks (which appear to be something soda and lime?), Bryan got up and played a few songs.

In summation of the weekend, this tweet just about says it all.

Luke Bryan showed up to play at his own bar last night and I passed 3 tractors hauling trailers full of bachelorettes and an ambulance dealing with a scooter crash victim on my way home.

BROADWAY IS BACK Y'ALL.

And then, right around 2:30am, things finished back where they all started.

metro police units have a fight at jason aldeans, 307 broadway

Nashville is back. But it never really left!