What We Know About The Status Of Nate Diaz, UFC 244, And The BMF Title Fight: There’s Still Hope 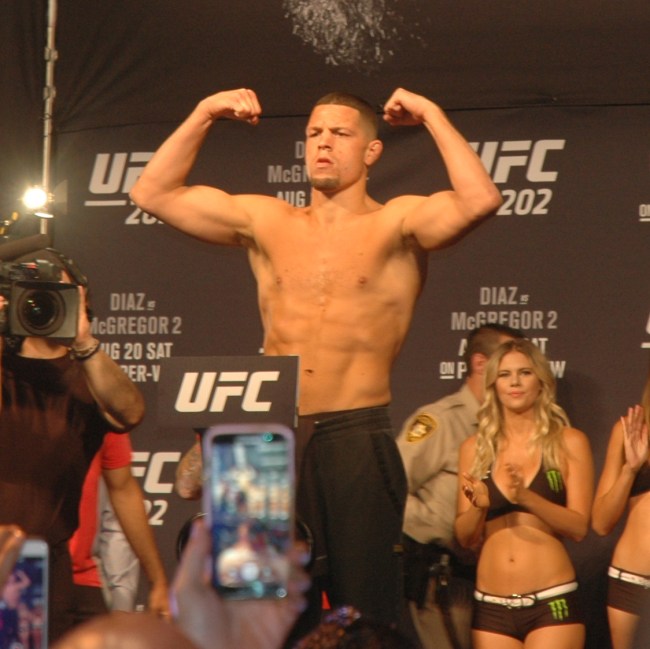 MMA fans around the world unleashed a collective gasp yesterday, when Nate Diaz, one half of next week’s UFC 244 main event, announced on Twitter that he would not be traveling to New York City to fight Jorge Masvidal for the BMF title because of a failed drug test. The tweet simultaneously caused a massive buzzkill for, and uproar from, those eagerly anticipating the matchup. To say it took the wind out the sails would be a massive understatement.

But less than a day later, there’s still a sliver of light shining down on this darkest of moments because, well, it’s still entirely possible that Diaz and Masvidal will meet in the center of the Octagon at Madison Square Garden on November 2 afterall. The UFC will need to clear this up immediately.

The Diaz tweet literally took everyone by surprise. He’s the one fighter who famously claimed that every other mixed martial artist in the game, aside from him and his older brother Nick, was on steroids. Being a clean athlete has always been part of his mantra and identity. So has sticking to his own personal moral and ethical code, which is why he chose to divulge classified information publicly. He felt compelled to tell the world exactly what he thought of the situation, despite what he claims were efforts to keep the findings of the United States Anti Doping Agency (USADA) hush until further review.

Whether it’s USADA’s fault, whether Diaz truly did test positive for a tainted supplement, whether the UFC knew about the test and chose not to disclose it, or whether it’s a giant conspiracy to deflect attention from Conor McGregor’s own massive 2020 comeback announcement from earlier in the day, everything about the way this situation was handled is regrettable honestly. But what is absolutely commendable is the way Jorge “Gamebred” Masvidal responded after learning that the biggest fight of his career was in jeopardy.

Taking to Twitter less than an hour after the news broke, Masvidal defended Diaz’ name, honor, and legacy, calling him “one of the cleanest” MFers in the UFC. “Gamebred” made it clear that he still wants Diaz and the BMF title fight on November 2, regardless of what USADA says.

But how can the show go on after such a major bombshell dropped? Well, fortunately there’s a precedent …

You not the baddest mofo in the game (i am) but you are one of the cleanest mofo’s @NateDiaz209 I’ll see you nov 2. I know your name is clean. I don’t need @usantidoping to tell me shit!

Looking back on last December’s UFC 232 card, which was originally scheduled to take place at the T-Mobile Arena in Las Vegas, the UFC actually shipped an entire event across state lines at the eleventh hour after headliner Jon Jones was not granted a license to fight in Nevada due to inconsistencies found in a drug test. The show ultimately went on, albeit in Los Angeles, after the California State Athletic Commission sanctioned Jones to fight.

Fans, along with the other fighters on the card, were ticked off, to say the least, but the UFC decided that Jones, for whatever reason, was the exception to the rule. Of course, that reason was most likely money, but the precedent was set. No matter the violation, there is always a grey area, and Diaz may very likely be able to thrive in this neutral territory, if he wants to …

So offended and irked by the failed test and tainted supplement accusation, Nate Diaz decided to recuse himself from the UFC 244 BMF title fight when he didn’t have to because he refuses “to have my name tainted as a cheater.” However, Diaz has not actually been removed the fight with Masvidal, and the UFC has yet to comment publicly on the fiasco. So where does the UFC 244 main event stand right now?

Well, as of right now, the BMF title fight is still on, and Nate Diaz has not been provisionally suspended by USADA, the UFC, or the New York State Athletic Commission (NYSAC). Additionally, the fight is trending on numerous media platforms — the Diaz announcement could actually end up helping the sales of his UFC 244 main event against Jorge Masvidal.

For now though, we’ll just have to wait and see. The ball is in the UFC’s court, although they’ll have to hustle, big time, to get this one cleared by NYSAC, and, more importantly by Diaz, who once again, is proving that he’s the exception to the rule, but not because he broke one that he cares about, but because Nate Diaz lives by his own code, which is perfectly in line with the way of the BMF.