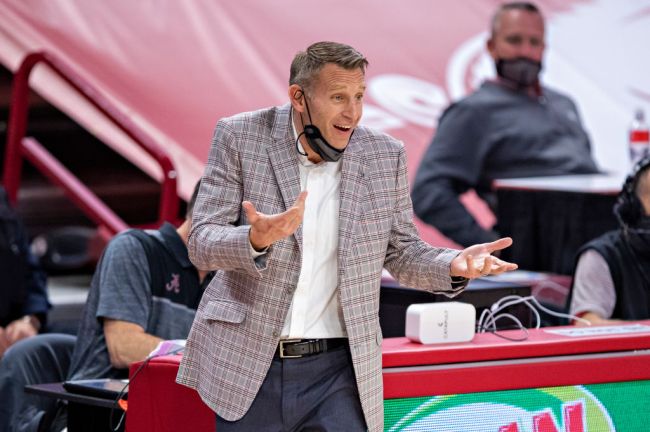 All of the homies hate Will Wade, including Alabama head coach Nate Oats. One of the most heated rivalries in college football brought its hostility to the hardwood on Sunday as the top-seeded Crimson Tide faced the No. 3-seed Tigers in the Southeastern Conference Championship, and the result was an exhilarating 70-69 win for the regular season champions out of Tuscaloosa.

Things got chippy before the game even began and the tone was set for a back-and-forth, final-second, one-point game.

Major pregame jawing between Bama and LSU.
This is already heated.

SEC Commissioner Greg Sankey among those who helped break it up. pic.twitter.com/0bpcpUwqH6

Alabama and LSU players just confronted each other at midcourt during warmups. Assistant coaches and officials had to separate them.

At the root of the jawing was not the players, but the coaches and staff. That trend continued as Alabama played to a one-point win. The Tigers had the ball in the closing seconds and got three shots off that didn’t go in. When the clock hit zero, Oats was fired up and turned to his opponent’s bench with some choice words. In the second year of his time with the Tide, Oats led his team to both the regular and postseason conference titles and is set to go dancing as either a national one-seed or a two-seed at 24-6. Even with less than two complete years under his belt in the SEC, even he dislikes Wade.

Alabama head coach Nate Oats told LSU to 🗣 “GET THE F**K OUT!!” 😳pic.twitter.com/9ffYHqNi5E

To provide some context, Wade, LSU’s head coach, is a cheating, lying slimeball. College basketball is amidst a multi-year bribery scandal that was so widespread and problematic that the FBI took over to lead the investigation and has punished a few of the involved parties in the federal legal system— not just with NCAA sanctions. Among the coaches to have been caught up in the impermissible behavior, Wade and LSU basketball are at the forefront. Wade was heard on wiretap arranging payments for recruits to come and play in Baton Rouge. This is where I would typically say “allegedly,” but the NCAA announced in August of 2020 that Wade definitively arranged payments and “impermissible benefits” to at least 11 recruits and their families. ELEVEN!!!!!

“The documents say the NCAA’s enforcement staff received information that Wade “arranged for, offered and/or provided impermissible payments to at least 11 men’s basketball prospective student-athletes, their family members, individuals associated with the prospects and/or nonscholastic coaches in exchange for the prospects’ enrollment at LSU.”

Some of the arrangements included direct cash payments. His recordings have since been released and he discusses a “strong ass offer” on multiple occasions.

Hearing the Will Wade audio, compared to reading a quote.

Does it make a difference to you?

Wade was suspended briefly in 2019 by the university, but he refuses to cooperate in either the internal or external investigation, despite damning evidence.

This, of course, is the sparknotes version of Wade’s wrongdoings. There is no denying that this behavior is happening across college basketball and that recruiting violations run rampant across college sports as a whole (if you ain’t cheating, you ain’t trying), and HBO’s documentary ‘The Scheme’ provides a great look into the FBI investigation surrounding the scandal.

The bottom line is this— LSU and Wade are cheating their asses off and being shady, arrogant and ignorant about it. As the NCAA wraps up its almost four-year investigation, the school has not fired their head man, and he refuses to admit any fault. Thus, he coaches through the scandal and plays the role of college basketball’s biggest villain.

On the other side, Oats was named the SEC’s Coach of the Year and has a team that looks primed to make a deep run if the stars align in March Madness. His distaste for Wade makes him only that much more likable.

Nate Oats CUTTING DOWN THE NET BECAUSE THE TIDE IS YOUR CHAMP pic.twitter.com/fTyeOlB07B

What Oats has done with that team is remarkable, especially during a year that has been affected by COVID-19. Beating Wade in dramatic fashion is just the icing on the cake.