These Are The Best Trolls From Nationals Fans In Bryce Harper’s Return To D.C. 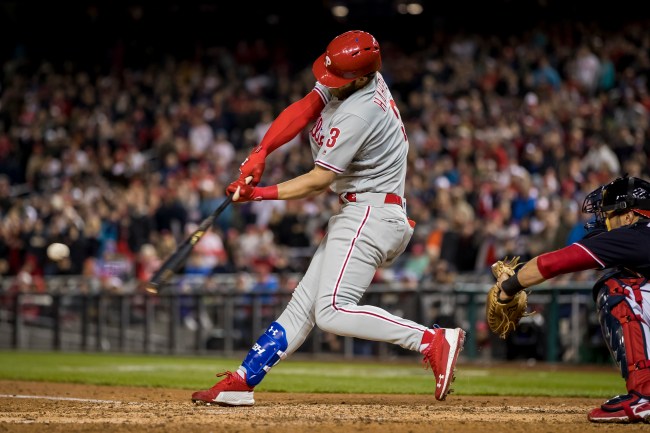 The NBA and its fans have earned the reputation of being the pettiest among the four major sports. One of its players made multiple burner social media accounts to defend himself against equally petty fans, for shit’s sake. MLB fans in the nation’s capital adopted some of that saltiness on Tuesday night when their ex-savior Bryce Harper came to town wearing a new outfit.

Harper was met with a loud chorus of boos in his return, which is to be expected, but silenced his former admirers when he drilled a 458 foot moonshot home run to the second deck in right-center field during the 8th inning of 8-2 Phillies win. Harper would finish the night mushroom stamping his old team to the tune of 3 for 5 with 3 RBIs.

“I heard the boos,” Harper said, “and just remembered that I had 45,000 people and more in the city of Philadelphia that were screaming at their TVs cheering.”

Nationals Park had its fair share of Phillies fans, who loudly chanted “We got Harper!” and yelling at Nationals fans that their park is “Citizens Bank South.”

Harper may have got the best of D.C. in his return, but I don’t know how he’s going to recover from the sick burns. Check out the creative troll jobs Nats fans brought to the ballpark on Tuesday.

“Turns out Papelbon was right” is an all-time sign #Nationals pic.twitter.com/66ioQ0Iv1L

This sign is alluding to the 2015 mini dugout brawl Papelbon and Harper got in after Harper failed to run out a routine fly ball. I forgot this happened, but it’s excellent content.

But is it rent-free? pic.twitter.com/yQ07SCzJVZ

This guy claims to have painted @ThomasBoswellWP’s house 15 or 20 years ago pic.twitter.com/NbNni0BSJM

damn, these modified Bryce Harper jerseys are getting pretty personal. Nats fans not holding back

House divided. Kurt Yorgey and his daughter Allyse of Salisbury, Md. Allyse says she was planning to boo Harper, but might’ve been swayed by his farewell post this morning. Wow. I forgot to ask if she likes Silver Diner. pic.twitter.com/CWSzY94IBK