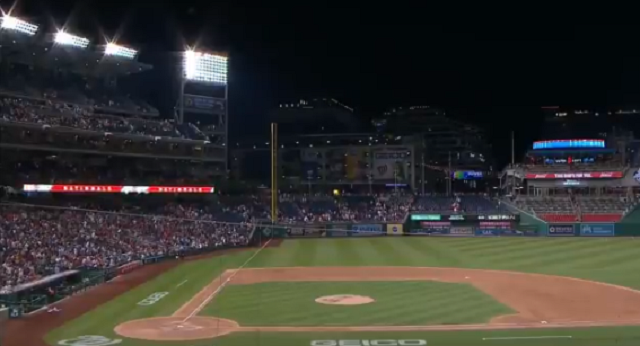 There was an apparent incident outside of Nationals stadium during the Padres-Nationals game.

According to various reports, there were loud bangs that sounded like gunshots heard in the middle of the game which led to fans and players fleeing the stadium.

Scary situation here at Nationals Park as people near my section started running as they heard apparent gunshots. The stadium announcer said it was reportedly outside the stadium. pic.twitter.com/KB2dy9UN4B

Hope everyone is safe at Nationals park. I heard a few loud bangs and then a mass exodus. View from my roof pic.twitter.com/MA1B7z83u2

Players, including Fernando Tatis Jr. Just ran into stands and grabbed family members and brought them to clubhouse. pic.twitter.com/DlC1bSv3I7

I've never seen what is happening at Nationals Park pic.twitter.com/PcRtZpA89i

Update: The Nationals released a statement saying there was a shooting outside the stadium.

A shooting has been reported outside of the Third Base Gate at Nationals Park.

Fans are encouraged to exit the ballpark via the CF and RF gates at this time.

We're working with law enforcement to provide more information as soon as it becomes available.

Everything is totally calm within Nationals Park at this point. Fans are being told to leave through them CF and RF gates. Gunshots were heard on the third base side OUTSIDE the ballpark. A scary situation, but fans are filing out calmly.

Breaking: At least two people are confirmed to have been shot outside the Nationals stadium tonight, per DC Metro Police. One woman who was shot was briefly treated by first responders in the stadium.

Update #2 DC Police have released a statement confirming the shooting but state there are “no ongoing threats” at the moment.

MPD is responding to a shooting in the 1500 block of South Capitol Street, SW, in which two people where shot outside of Nationals Park. This is currently an active investigation and it appears there is no ongoing threat at this time.